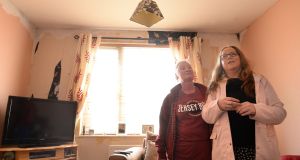 A year-and-a-half after a damning European ruling on the state of local authority housing in Ireland, a group of communities has said no progress has been made on improving conditions.

Despite Ireland being found in breach of human rights by the European Committee of Social Rights (ECSR), tenants say they are still left living in dilapidated conditions with no sufficient means of having their voices heard.

A survey of residents in 13 council estates conducted by the Community Action Network (CAN), a social justice NGO, found three-quarters of homes had mould and more than one-third suffered from both “sewage invasion” and pests such as rats and mice.

In October, the Strasbourg-based ECSR made a ruling in favour of 20 local authority communities saying their rights had been breached by a failure to provide adequate, clean and safe housing. It found Ireland to be in violation of article 16 of the European Social Charter.

Today, however, CAN’s research claims 70 per cent of the tenants surveyed find their homes cold or difficult to heat; 37 per cent have water coming into their building; and 75 per cent complain about the standard of maintenance.

One in five says a medical practitioner has advised them their health is in danger, CAN said.

“It’s hard to fathom how the Government can so blatantly whitewash this important collective complaint and the European committee’s decision,” said CAN’s Peter Dorman.

“What is alarming is that research shows that for many people their home is making them sick.”

As well as calling for a general improvement in conditions, CAN says local authority tenants should have access to an independent complaints process and that a full State review of the housing stock should be completed by Government.

In the Balgaddy estate in Lucan, Co Dublin, tenants were eager to demonstrate their frustration at having to fight to secure basic living conditions.

Michelle Morrissey, a tenant in Tór an Rí, within Balgaddy, forms big circles around her eyes with her fingers to illustrate the size of the black eyes she suffered after falling down her steps two years ago. Her home, like those surrounding it, suffers from damp and leaks – in her case water flows down the steps that lead down from her front door, often icing over in winter.

The estate is just 12 years old but tenants say problems with leaking roofs began almost immediately. Flaking paint on the exterior walls and boarded up ground-floor units are testament to the problem.

Mary Cooney, a neighbour, produces a bucket of black water that had collected under a light fitting in her bathroom on Tuesday morning.

“It hasn’t stopped,” she says of the leak. Her sitting room, hallway and bathroom walls and ceilings are scarred with black mould, peeling paint and damp. “It’s a nightmare; like you are not being listened to,” she says.

South Dublin County Council said it is committed to addressing “legacy housing maintenance issues” in some of the existing 448 Balgaddy homes. An “accelerated maintenance programme” announced last month will replace windows and doors, complete safety works and upgrade heating systems as part of wider works in the area.

It is one example of both the problems and required solutions highlighted by those communities living in problematic housing long after their initial collective complaint was filed at European level in 2015.

The Department of Housing said local authorities were responsible for the management and maintenance of their own housing stock.

However, it said very significant investment in regeneration projects was “a key element” of Government commitment.