Minister for Housing tells architects, ‘we all made sacrifices when were were young’ 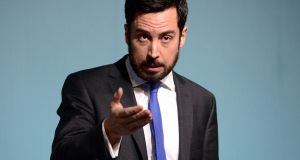 Minister for Housing Eoghan Murphy: ‘This isn’t about allowing for high density bedsits, it is about a new style of accommodation.’ File photograph: Cyril Byrne

Co-living blocks, which offer studio rooms with communal facilities such as kitchens and laundries, offer an “exciting” choice to young workers, Mr Murphy told a Royal Institute of the Architects of Ireland and Department of Housing conference in Dublin on Monday.

Workers starting out in their careers have always made sacrifices, he said, and may chose to sacrifice space for lower rents.

“This is a generation that has a different approach to things; they will sacrifice certain things for others, as we all did when we were younger.”

Mr Murphy’s comments follow criticism of plans by Bartra Capital for a co-living complex in Dún Laoghaire with 208 “single occupancy bedspaces” and communal kitchens each shared by up to 42 residents. Threshold described the developments as “21st-century bedsits with a glossy makeover”, while Green Party Cllr Ciarán Cuffe said the scheme was “Dickensian” in nature. Bartra proposes that each en-suite bedroom will be 16.5sq m (177sq ft). The recommended minimum size for a disabled parking space is 17.2sq m.

Mr Murphy said he had allowed for the introduction of co-living schemes to give people more options in their choice of housing.

“Most people in Ireland today do not have a choice as to how or where they live, choice shouldn’t just be something for the privileged few, people shouldn’t feel trapped by their housing circumstances,” he said. “This isn’t about allowing for high density bedsits, it is about a new style of accommodation.”

The model had already proven successful in other cities such as London and New York he said, and catered for people who wanted lower rents, closer to their jobs, but also wanted the sense of community offered by co-living blocks.

A fix for the housing crisis?

“We all have to recognise there are some young people who are starting off in their first careers who don’t want to live in a four bed semi-d with other people but don’t also want to live in the isolation of a studio or a flat.”

Dublin city planner John O’Hara told the conference that extra height and smaller apartments would not fix the housing crisis.

“We need to question the assumption that extra height and smaller units will solve the housing crisis, we in this room know it won’t. The evidence from Vancouver and Chicago is that it doesn’t.”

Flexibility in relation to apartment sizes and heights was “an element” in increasing the supply of housing, but there is a need to guard against a market-led desire for “ground scrapers”, he said. “These [are] 10-12 storey buildings with dark streets. I don’t want to deride Hawkins House – but that sort of thing.”