Frustration grows over lack of school places for children with autism

‘I am frightened for my son,’ says one mother ahead of a protest in Dublin on Saturday 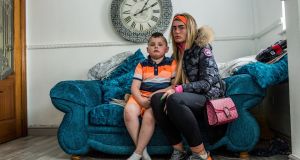 Maddix and his mother, Nadine Staunton, who is struggling to find a new school for her son. Photograph: James Forde

Aidan Ennis (6), from Cherry Orchard, Dublin, will be almost eight before he finally starts school.

He has autism, and his mother, Louise Lawlor, has had her “heart broken” by the news he will not have a school place this September.

He cannot attend a mainstream school, as he has limited speech, violent tendencies and is not toilet-trained.

Since 2017 he has attended a specialist autism preschool, Hope Montessori in Inchicore, where he has learned life-skills such as basic communication and coping with going into shops. He has also learned the alphabet, some numeracy, arts and sports.

“But he needs to begin the education he is entitled to, to learn, to adapt and reach his full potential,” says Ms Lawlor.

He has been refused by 14 schools “in Clondalkin, Tallaght, Palmerstown, Lucan, Walkinstown, all across the southside”, says Ms Lawlor, “because their ASD [autism spectrum disorder] units are all full.”

And most recently she has been told there will be no space for him this autumn in a new ASD unit, due to open in Mary Queen of Angels school in nearby Ballyfermot. The school has confirmed all six places are taken, and “there is a real problem with lack of places for children with autism in the area”. It already “has a long waiting list”.

“I am just so hurt, frustrated and frightened for Aidan. He can be aggressive but he is also full of love, joy, and he has the kindest heart,” says Ms Lawlor. “What’s going to happen to my son?”

She is one of a number of Dublin parents who will take part in a protest on Saturday in the city centre, about the lack of school places for their autistic children.

The issue was recently highlighted by the AsIAm charity in its Invisible Children report, which finds 54 per cent of surveyed parents of autistic children “felt lack of school places was the biggest barrier for their child in accessing education”.

Nadine Staunton, from the north inner city, will be protesting on behalf of her son, Maddix (6), who also has no school place in September.

He leaves the Presentation Primary School George’s Hill, Dublin 7, next month because, although it is mixed from junior infants to first class, from second class it is girls only. Maddix has difficulties communicating and following instructions, and can be aggressive. He is not toilet-trained and has had a special needs assistant (SNA) since junior infants.

Ms Staunton had hoped he would progress to Brunner primary on North Brunswick Street with the support of an SNA. “They said they couldn’t take him because they don’t have the SNA. I’m being left in the darkness. I don’t know what is going to happen to him. He loves going to school. It’s his little routine and it’s so important to him.

“He has a right to an education but it’s as if, because he has autism, he doesn’t matter. I am begging the Department [of education] at this stage to please, please put a plan in place for our kids to have an education. We have to fight for our kids because no one else will.”

Parents and families will walk from the Garden of Remembrance at noon on Saturday to the Department of Education on Marlborough Street, Dublin.

“We’re regular mothers who are sick of seeing our children treated like they’re nothing,” said Ms Lawlor.

In a statement responding to last month’s AsIAm report, Minister for Education Joe McHugh said work was “ongoing” to secure additional school places for children with autism though there were “undoubted challenges” in some schools and communities.

The department, Mr McHugh added, would consider all funding applications for schools to reconfigure existing space to accommodate a sanctioned special education class or to provide additional accommodation.