Plan to raise standards in capital’s housing complexes, some which are 80-plus years old 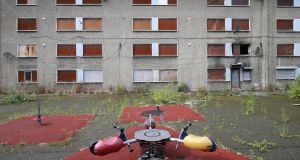 O’Devaney Gardens back in 2016: Most of the 109 complexes to be worked on do not meet building standards of accessibility, fire safety and building quality. Many had mould, condensation and sewerage problems. Photograph Nick Bradshaw

More than 6,000 units of Dublin city’s oldest and most dilapidated flat complexes are to be redeveloped under a 15-year plan to raise social housing standards across the city.

Dublin City Council plans to regenerate more than 100 flat complexes, some of which were built more than 80 years ago, to improve the living standards of existing tenants and to increase the numbers of homes on its lands.

All of the 6,391 flats are in blocks more than 40 years old, and some were built in the 1930s, including St Michan’s House and Chancery House near the Four Courts, Oliver Bond House in the south inner city and Pearse House on Pearse Street.

Most of the 109 complexes did not meet current building standards of accessibility, fire safety and building quality, and a significant number had mould, condensation and sewerage problems, the council said.

The council was last year the subject of a ruling from the European Committee of Social Rights in relation to the poor condition of some of its older flat blocks. The Strasbourg-based committee found the human rights of local authority tenants in 20 estates in Dublin, Cork and Limerick had been breached because of a failure to provide them adequate housing.

The council is considering a number of options for regenerating the flats, including the amalgamation of existing blocks, new build extensions and additional floors to blocks, and phased demolition and rebuilds.

While the preferred options will be assessed on a case-by-case basis, demolition may be the best solution in many cases the council said. “Recent feasibility studies indicate the cost of deep retrofitting complexes can be as high as demolition and rebuild.”

There will be “significant challenges in securing funding approval of the scale and magnitude for this renewal and redevelopment programme” the council said. While it hoped to secure some funding from the new €2 billion Urban Regeneration and Development Fund announced as part of the National Framework Plan, it was likely to require private funding, possibly including the use of public-private partnerships (PPPs).

However the chair of the council’s housing committee, Daithí Doolan, said the council must not return to the PPP model.

“References to the use of PPPs will have to be withdrawn, given the outright failure of that model in the past, which left so many communities high and dry.”

A PPP deal between the council and developer Bernard McNamara collapsed in mid-2008, leaving several flat complexes vacant and undeveloped.

Mr Doolan said he was fully supportive of the plans to provide better living standards for tenants, and to secure additional social housing on council land. He added that the ground floors of buildings had the potential for use as shops and other businesses, to generate economic development and jobs for the community.