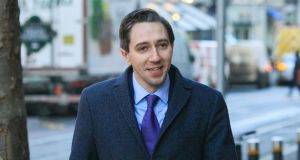 Minister for Health Simon Harris is considering a three-day pause between the request for an abortion and the medication being distributed by a doctor. Photograph: Gareth Chaney/Collins

Two doctors will be asked to determine whether a woman’s life, health or mental health is at risk before an abortion can be provided, under plans being considered by the Government.

The Department of Health is due to publish a policy paper this week outlining what legislation will replace the Eighth Amendment, in the event it is repealed from the Constitution.

It is expected the Cabinet will hold a special meeting tomorrow or Thursday to sign off on the final wording of the referendum Bill and the contents of the policy paper. It had been anticipated the two would be agreed at a Cabinet meeting today but it has been delayed pending the verdict of the Supreme Court in a case on the rights of the unborn, which is to be delivered tomorrow.

Government figures stressed yesterday they were confident that a referendum could be held before the end of May, despite the slight delay.

The 10-page policy document will confirm the Government’s commitment to implementing the recommendations of the Oireachtas Committee on the Eighth Amendment and to allowing for terminations “with no specific indication” up to 12 weeks.

While it will be detailed, Government sources stressed it would not be prescriptive as there is a significant amount of work to be completed. Among the issues to be resolved is whether a waiting period or other requirements will be placed on a woman seeking a termination in the first trimester of pregnancy.

The policy paper will commit to abortion within the first trimester being conducted by way of a pill and being a GP-led service.

A three-day pause between the request for an abortion being made by the woman and the medication being distributed by the doctor is under serious consideration by the Minister for Health, Simon Harris.

In other countries, women are obliged to undergo mandatory counselling before a termination is provided but this will not be applied here.

It is also understood two doctors – a gynaecologist and a doctor with speciality in the area concerned – will determine whether a woman’s life, health or mental health is at risk before a termination can be provided beyond 12 weeks.

Taoiseach Leo Varadkar had indicated previously it would have to be a “serious risk” but it is understood it will not be specific about the potential risk to a woman’s life or health. No distinction will be made between health or mental health.

It is understood the Government will mirror the current Protection of Life During Pregnancy Act, which allows for terminations when a mother’s life is at risk. Two doctors will make the decision in these specific cases but there will be an appeal mechanism available to the woman.

The policy paper will also commit to the decriminalisation of abortion but will allow for doctors to be penalised. This will allow for jail sentences up to 14 years if a medical professional carries out a terminations outside the current law.