Cabinet agrees to table legislation to hold an abortion referendum 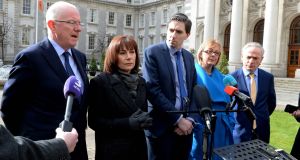 Minister for Health Simon Harris said people had waited for three decades to have their say on abortion. Photograph: Cyril Byrne

The Cabinet has agreed to hold a referendum asking voters to repeal the Eighth Amendment and “provision be made in law for the regulation of termination of pregnancy”.

The decision follows a Supreme Court ruling on Wednesday confirming the unborn has no Constitutional rights outside Article 40.3.3.

Ministers agreed to introduce the Referendum Bill in the Dáil tomorrow and move towards a vote at the end of the way. The intended date is May 25th.

Taoiseach Leo Varadkar said the referendum is about asking citizens “to allow women to make major decisions for themselves”.

“It’s about trusting women to decide, in the early weeks of their pregnancy, what’s right for them and their families.

“And it’s about trusting our doctors to decide when continuing with a pregnancy is a risk to the life or health of a woman. Above all, it’s about trusting Irish people to consider this matter in depth, with compassion and empathy, as I know they will.”

Speaking after the Cabinet meeting, Minister for Health Simon Harris said people had waited three decades to have their say on this matter and he was looking forward to vigorously campaigning in favour of change.

The Minister insisted the referendum campaign should focus on the question of repeal and not on what will replace it in legislation.

Mr Harris said focusing on the future law was hypothetical and academic if the Eighth Amendment remained in the Constitution.

“If you vote No and the Eighth Amendment remains in the Constitution, we will not be able to address issues in relation to women who have had fatal foetal abnormalities in their pregnancy, in relation to women and girls who have been raped and abused in this country, to the fact that our daughters, sisters, wives, mothers, work colleagues could be using the abortion pill without medical supervision and we will not be able to do anything about the fact that women from every single county in Ireland travelled to the UK.

“Abortion is a reality in Ireland.”

“The question is: are you in favour of making that safe and legal?”

Mr Harris was joined four Ministers, who all insisted they would campaign to repeal the Eighth Amendment.

The Referendum Commission will be established tomorrow and will be chaired by Ms Justice Isobel Kennedy.

Mr Harris admitted it will be difficult to meet the May deadline but the Government will do all it can in ensuring it meets its deadline.

The Government will publish on Friday a short policy paper outlining a proposed future abortion law, which it will introduce in the Dáil if the referendum is passed.

It will commit to abortions on request up to 12 weeks and propose that a time period should be introduced between the request for a termination and the abortion pill being accessed.

It would not stretch beyond three days, it is understood. The two options being examined are a dated prescription or requesting the woman return to the doctor in the following days.

After 12 weeks, two medical professionals will be asked to determine the risk to a woman’s life, health or mental health before a termination can be provided. The same will apply in the cases of fatal foetal abnormalities. An appeals mechanism will be available to the woman in the event she is unsatisfied with the outcome.

The Bill providing for the referendum is likely to be passed comfortably by the Oireachtas.

However, none of the three largest political parties are unanimously backing the proposal for abortion on request up to 12 weeks.

Sinn Féin is unlikely to hold an ardfheis to update its abortion policy before the referendum on repealing the Eighth Amendment is held.