Delivering the opening address at a Why Women Matter conference in Rome the former president Mary McAleese has said the Catholic Church “has long since been a primary global carrier of the virus of misogyny”. Video: Voices of Faith 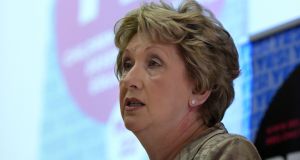 The Catholic Church ‘has long since been a primary global carrier of the virus of misogyny,’ former president Mary McAleese has said. File photograph: Dara Mac Dónaill/The Irish Times.

The Catholic Church “has long since been a primary global carrier of the virus of misogyny,” former president Mary McAleese has said.

“It has never sought a cure though a cure is freely available. Its name is ‘equality’,” she said.

Delivering the opening address at a Why Women Matter conference in Rome, organised by Voices of Faith, Ms McAleese said she suspected that many women would say “they experience the church as a male bastion of patronising platitudes to which Pope Francis has added his quota. John Paul II has written of the ‘mystery of women’. Talk to us as equals and we will not be a mystery”.

Pope Francis had said “a ‘deeper theology of women’ is needed. God knows it would be hard to find a more shallow theology of women than the misogyny dressed up as theology which the magisterium (the church teaching authority) currently hides behind,” she said.

The conference to mark International Women’s Day was scheduled to take place at the Vatican, as it has over the past four years, but was moved to a location near St Peter’s Square when Cardinal Kevin Farrell, prefect of the Dicastery for Laity, Family and Life, refused to allow Ms McAleese as a panellist.

She was the opening speaker at the conference on Thursday and spoke on the theme “The time is now for change in the Catholic Church’”.

Ms McAleese said that “today the Catholic Church lags noticeably behind the world’s advanced nations in the elimination of discrimination against women.

“Worse still, because it is the ‘pulpit of the world’, to quote Ban Ki-Moon (former UN secretary general), its overt clerical patriarchalism acts as a powerful brake on dismantling the architecture of misogyny wherever it is found.”

She said th church “which regularly criticises the secular world for its failure to deliver on human rights has almost no culture of critiquing itself. It has a hostility to internal criticism which fosters blinkered servility and which borders on institutional idolatry”.

The former president said: “Down the 2000 year highway of Christian history came the ethereal divine beauty of the nativity, the cruel sacrifice of the crucifixion, the hallelujah of the resurrection and the rallying cry of the great commandment to love one another,” she said.

“But down that same highway came man-made toxins such as misogyny and homophobia to say nothing of anti-Semitism with their legacy of damaged and wasted lives and deeply embedded institutional dysfunction.”

Today, she said “we challenge Pope Francis to develop a credible strategy for the inclusion of women as equals throughout the church’s root and branch infrastructure, including its decision-making.”

The church had confined itself “to recycled thinking among a hermetically sealed cosy male clerical elite flattered and rarely challenged by those tapped for jobs in secret and closed processes”.

It had “kept Christ out and bigotry in. It has left the church flapping about awkwardly on one wing when God gave it two. We are entitled to hold our church leaders to account for this and other egregious abuses of institutional power and we will insist on our right to do so no matter how many official doors are closed to us.”

Only “a church of equals is worthy of Christ. Only such a church can credibly make Christ matter. The time for that church is now, Pope Francis. The time for change is now,” she said.

Her speech was met with enthusiastic applause from the audience, which was composed mainly of lay people - most of them women - and some members of religious orders, more nuns than priests.

Other speakers at the conference included German theologian Alina Oehler; Spanish official with the Jesuit Refugee Service, Elisa Orbananos Hernando; US author Nicole Sotelo; and US Jesuit priest Fr Luke Hansen. The moderator was theologian and director of the UK’s Catherine of Siena College, Tina Beattie.