Q&A: How many days a week will children be able to attend school from late August?

Roadmap for reopening schools being drawn up over the next fortnight 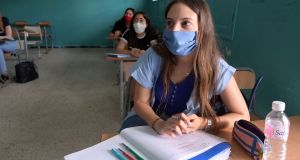 Officials are examining school reopening policies in other countries. Above, Tunisian school students wearing face masks in a classroom on May 28th, after authorities approved the easing of measures put in place due to the Covid-19 pandemic. Photograph: Fethi Belaid/AFP via Getty Images

There’s lots of commentary about reopening schools. How safe would it be to do this?

Latest research by the HSE has concluded schools are “not a high-risk setting” for the transmission of Covid-19.

The report published in a European journal on infectious disease surveillance concludes reopening of schools should be considered as an early measure in the lifting of restrictions.

On what evidence has the HSE based its conclusion that schools are “not a high-risk” setting?

Public health experts examined all known cases of the virus in school settings in Ireland prior to the shutdown of schools on March 12th.

There were six confirmed cases – three children and three adults.

An examination of more than 1,000 contacts of these cases in the school settings found there were no confirmed cases of Covid-19 in the following two weeks.

These findings echo similar research in Iceland, Italy and Australia.

The authors conclude there are “no zero risk approaches, but the school environment appears to be low risk.”

What is the Government’s stance on reopening schools?

Minister for Education Joe McHugh this week pledged that a roadmap for the reopening schools from late August will be ready within a fortnight.

McHugh has signalled that social distancing measures of two or even one metres could be very difficult to implement in schools.

At primary level, for instance, we have some of the most overcrowded classrooms in Europe.

One option which Department of Education officials are understood to be examining is creating “pods” of entire classes who remain together during the school day and do not mix with others.

This may allow schools to get around social distancing requirements and ensure most children attend school full-time.

If this does not prove possible, school managers and teachers’ representatives have indicated it will be impossible to accommodate all children in school at one time.

The Irish Primary Principals Network, for example, says some principals estimate about one third of a class would fit in a standard classroom if a two-metre distance is required between desks. This could require pupils attending school on every third day.

Ireland is in a minority of countries in Europe in keeping its schools closed, according to Unesco figures.

Out of 48 countries or jurisdictions, 25 are open are or are planning to open shortly; 12 have yet to decide; and 11 – including Ireland – will not reopen in the current academic year.

Denmark was among the first to reopen over a month ago and announced recently that transmission of the virus has continued to fall.

England is due to partially reopen schools from June 1st for pupils in reception (age four to five), year one (age five to six) and year six (age 10-11).

What is the view of teachers, principals and parents in Ireland?

The National Parents’ Council Primary has called for public health advice to be kept under regular review and for schools to be partially reopened in mid-June for some pupils – such as sixth class – if safe to do so.

Last month, teachers’ and principals’ representatives expressed a willingness to reopen schools in June, if it was deemed safe and in line with public health advice.

However, since the Government ruled this out, their focus shifted to ensuring detailed guidance and supports are in place to ensure schools can resume safely.

So, is there any chance schools will reopen in June?

It seems highly unlikely. However, there is a possibility some schools could reopen for a very limited number of children in July/August.

The department is working on a “summer programme” for children with disabilities and from disadvantaged backgrounds.

This is likely to be a combination of online and in-school provision, according to McHugh, if public health advice allows.

When will we get a clear idea if what, exactly, is planned for schools in Ireland?

The Minister for Education said officials are examining school reopening policies in other countries and will have a “model” produced within the next fortnight.