‘Your bridal whites become the grey of scrubs/The dress a gown and boots, the veil a visor’ 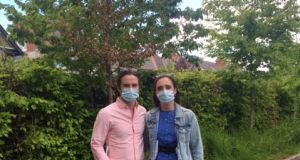 Ronan O’Keefe and Lucy Mathews were to be married in Enniskerry, Co Wicklow, on Saturday.

Front-line healthcare worker Dr Lucy Mathews and her partner, solicitor Ronan O’Keefe, were to be married on Saturday in Enniskerry, Co Wicklow, but instead they went for a walk. Their wedding had to be postponed due to coronavirus restrictions.

Dr Mathews is a senior house officer at Tallaght hospital and is on leave for a few days. She marked the day instead with her parents Aidan and Trish in the grounds of south Dublin’s Gonzaga College.

Her father, an author and RTÉ producer, later prepared the poem Mayday to mark the occasion. “Your bridal whites become the grey of scrubs/The dress a gown and boots, the veil a visor,” he wrote.

The postponement of his daughter’s wedding was “one along with thousands of others” due to the pandemic, he said. His daughter had been “very stylish about it. Instead of wedding pictures, she has a great story.”

On Saturday evening he said the family had a “very jolly” Zoom chat to mark the event involving the would-be married couple, himself, Trish, their other daughter Laura and her husband Hugh.

As he spoke on Sunday afternoon he and Trish were admiring their 10-month old granddaughter Iseult, with her parents Laura and Hugh in the garden outside. He considered himself and Trish blessed to be able to do so “when so many only have mantlepiece memories of their grandchildren.”