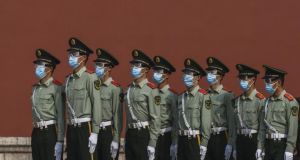 Criticism over China’s handling of coronavirus has led Beijing to adopt a prickly and pugnacious approach to diplomacy. Photograph: Kevin Frayer/Getty

“Throw away your illusions and prepare for a fight!”

That was the headline of an editorial in a newspaper run by China’s People’s Liberation Army recently. The article went viral and became a big talking point across China as its government engages in increasingly fractious diplomatic disputes with countries around the globe.

The headline was borrowed from the founding father of the People’s Republic, Mao Zedong, and the article followed on with the rest of his quote, saying: “We love peace, but peace survives through struggle, and peace is lost through compromise.”

No more compromise, China should brace for battle, the article argued.

It reminded the readers of the Opium Wars and China’s “century of humiliation” (1839-1949) when foreign powers forced China to pay large amounts in reparations and lease or cede chunks of its territory to other countries.

Those times may soon be revisiting China, the article in the People’s Frontline newspaper warned. “We have to face major political, diplomatic, security and military risks . . . Don’t forget that military means are always the means to guarantee we can maintain our bottom line,” it cited president Xi Jinping as saying.

The article and the debate around it comes at a time when China is locking horns with a dizzying array of nations over the coronavirus outbreak and multiple disputes beyond.

In Abuja last week the Nigerian House of Representatives passed an unprecedented motion to censure China for its reported maltreatment of Nigerians in the southern Chinese city of Guangzhou. The motion also called for a nationwide audit of the immigration status of every Chinese national in the country.

Relations with Ottawa have been severely strained since Canadian businessman Michael Spavor and former diplomat Michael Kovrig were detained in December 2018, an apparent retaliation for the arrest of Huawei chief financial officer Meng Wanzhou in Vancouver on a US warrant.

“It’s a hostage-taking and the ransom demand is Meng Wanzhou,” David Mulroney, a former Canadian ambassador to China, said recently when the pair passed their 500th day in captivity.

The Netherlands was accused of “playing with fire” this week when it changed the name of its representative office in Taipei from Netherlands Trade and Investment Office to Netherlands Office Taipei – a move Beijing interpreted as potentially being more supportive of Taiwan independence.

As other countries in the region focus on battling Covid-19, China has increased its level of military activity in the disputed South China Sea and around Taiwan, prompting the US state department to accuse Beijing of taking advantage of the virus to push its positions and bully its neighbours.

Non-coronavirus disputes between China and other countries pop up by the day but the thorniest issues currently relate to the outbreak, with the US, the EU, Germany, the UK, Australia and a string of other countries now challenging China and calling for an independent investigation into its origin and the early handling of the crisis.

Beijing’s response to Canberra was typical. The Chinese ambassador threatened an economic boycott that would quickly bring the country to its knees, and the editor of the party-run Global Times said Australia was nothing but an irritant: “It’s a bit like chewing gum stuck on the sole of China’s shoes. Sometimes you have to find a stone to rub it off.”

A prickly and pugnacious approach from Beijing’s “wolf warrior” diplomatic brigade seems to be the stock response these days as they tout Xi Jinping’s China Dream and harness previous humiliations and burgeoning nationalism “to achieve the great rejuvenation of the Chinese nation”.

Discussions online in China suggest many agree with this policy, and there are apparently large segments of the population that feel Beijing has been pushed around for long enough and foreign powers should no longer be allowed to stymie China’s rightful development.

“This group makes up the majority in China I would say. They are very patriotic, and they tend to see China as the victim in these disputes,” said a Beijing academic who asked not to be named.

There’s also a smaller, less vocal group, mostly among the middle classes, that fear Beijing’s policies are regressive and dragging the country back in the direction of Mao’s dark and isolationist days, he said. They have been grumbling about the advent of “a second Cultural Revolution” for some years now, he added, and they see the fired-up rhetoric on the international stage as a ploy aimed at cultivating legitimacy to ensure the party retains power – but a dangerous one that could easily backfire.

Only about six per cent of the population, or some 90 million people, have been invited to join the Chinese Communist Party, and the consensus in that inner sanctum is the critical one.

“The party is very complex, and like America they have doves and hawks, and the membership represents a whole range of views. Inside the party there is a form of democracy and meritocracy, and the debates are fierce,” the academic said. “But for now it is clear that the hawks are on top.”

At the end of the day, despite all the brinkmanship and bluster, he was of the view that stabilising the economy was paramount and pragmatism would prevail in Beijing “as long as the international community shows common sense”.

He pointed to a recent spike in anti-Asian attacks and sentiment in the Western world, and a Pew Research Centre poll that found nearly two-thirds of respondents had an unfavourable view towards China, the highest since it began asking the question 15 years ago.

“The average man or woman here thinks the West really does not like China, that it is often negatively portrayed in the international media, and that the western countries plan to punish China for coronavirus and come back and take its money, maybe land too, just like in the Opium Wars. People are getting defensive and that is dangerous,” he said, adding that it looked like China was going to become the political “punching bag” for both parties in the upcoming US presidential election.

As the “prepare for a fight” story continued to resonate around the country over the weekend, meeting with widespread approval, one of the most-liked comments came from a 94-year-old army veteran called Guang Ming.

“If there is a call for war, I too shall return,” he wrote.