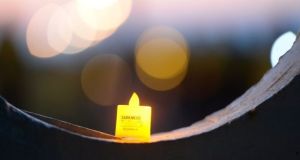 Counsellors are operating from their homes to support a broad spectrum of the community - from under 18s, to people who are middle-aged, to those cocooning.

Mental health charity Pieta House has experienced a “dramatic change in the volume of calls and texts” to its helpline since the beginning of the Covid-19 crisis, it has said.

The charity, which provides free therapy to those engaging in self-harm, with suicidal ideation, or bereaved by suicide, has seen a 49 per cent increase in calls to their helpline and a 46 per cent increase in text messages seeking the service compared to this time last year.

However, it has said it is “very vulnerable” in terms of its funding. Pieta House receives 80 per cent of its funding from public donations and last month had to postpone the annual Darkness Into Light fundraiser, which 250,0000 people were expected to attend and which normally brings in approximately €6 million.

Tom McEvoy, funding and advocacy manager for Pieta House, said the charity has never seen such a large increase in demand for the service before.

“During the crisis in 2011, we certainly saw an increase in the numbers of people attending Pieta. But we didn’t have a number at that point or offer crisis counselling over the phone, so this is a new dimension of our work, brought on through really unusual circumstances,” he said.

Counsellors are operating from their homes to support “a broad spectrum of the community - from under 18s, to people who are middle-aged, to those cocooning at the moment”, he said.

Mr McEvoy said organisers are “hopeful” that the Darkness into Light event will be able to go ahead later in the year. In the meantime, a separate ‘Sunrise Appeal’ has been scheduled for May 9th, encouraging people to “come together while remaining apart” by getting up at 5:30am to watch the sunrise and to “show community and solidarity with those impacted by suicide”.

Mr McEvoy said the services at Pieta House are “needed ever more so than before” and that the charity “really needs to be supported to be able to maintain our service.”