Mother and baby homes: another chapter from dark side of 20th-century Ireland 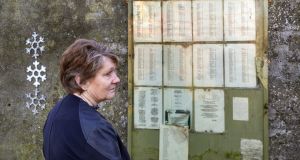 Catherine Corless looks at the list of names at the Tuam mother and baby home burial ground. Photograph: Joe O’Shaughnessy

It is probable that the most shocking revelations from the report from the Mother and Baby Homes Commission investigation, due to be published next week, are already known to us.

In its fifth interim report, published in April 2019, it confirmed that at Tuam “the memorial garden site contains human remains which date from the period of the operation of the Tuam children’s home so it is likely that a large number of the children who died in the Tuam home are buried there”. Local historian Catherine Corless had established that 796 children died there.

That interim report continued: “The human remains found by the commission are not in a sewage tank but in a second structure with 20 chambers which was built within the decommissioned large sewage tank.”

It found that “the remains involved a number of individuals with age-at-death ranges from approximately 35 foetal weeks to 2-3 years” and was, it said, “surprised by the lack of knowledge about the burials on the part of Galway County Council and the Sisters of Bon Secours” who ran the home.

Last November, Minister for Children Roderic O’Gorman said he intended to bring a memo to Cabinet to introduce legislation for the reburial of remains of babies at the former Tuam mother and baby home. A dedicated agency would be set up for a limited period of time to undertake the “excavations, exhumations, identification and reburial” of the bodies, he told the Oireachtas committee on children.

Legislation underpinning the work would allow for similar exhumations and reburials to take place at other sites, “if a range of determined factors were met”, he said. “This legislation will address any subsequent need beyond Tuam to undertake this sort of work.”

In Cork, although 900 children died in the mother and baby home at Bessborough or in hospital after being transferred there, the commission could only establish the burial place of 64.

It found that burials of children who died at mother and baby homes in Bessborough, Castlepollard in Co Westmeath and Sean Ross at Roscrea in Co Tipperary were “not recorded at all. More importantly, there is no certainty about where they are buried”. Similarly “with 55 ‘illegitimate’ children who died in Cork County Home/St Finbarr’s Hospital”.

The commission is also likely to repeat its criticism of Galway Co Council, which owned the Tuam home, and the Bon Secours Sisters who ran it, and the Sisters of the Sacred Hearts of Jesus and Mary at Bessborough in Cork, for the lack of information supplied to it, a criticism expressed in that fifth interim report.

It is expected to recommend redress for people who had been in the homes as children.

In its second interim report, published in April 2017, it expressed surprise that most of the 14 mother and baby homes and four county homes it investigated were not included in the redress scheme set up to compensate people who, as children, had been in orphanages, industrial schools, and reformatories investigated by the Ryan Commission which reported in May 2009.

An indication of the numbers involved comes from the Mother and Baby Homes Commission’s fourth interim report, published in January 2019, which disclosed that its confidential committee had met 519 former residents of the homes or others with connections to the institutions under investigation.

There has also been considerable speculation that the commission may recommend changes in legislation to allow people adopted from the homes legal access to all information about their biological parents, consistent with the rights of those parents, particularly the mothers, to privacy.

There was controversy last year over the level of access available to the commission’s records. O’Gorman last month said work was under way on drafting tracing legislation to allow adopted people to have their birth information.

Survivor groups look forward eagerly to publication of the report, after it goes before Cabinet next week. In the past they have expressed frustration at delays in completion of the report, particularly on those occasions when the commission sought extensions of time in the past five years, and which were granted by the Government.

Some survivors have also been seeking redress for many years and had campaigned for the homes they were in as children to be included among the institutions investigated by the Ryan Commission. It decided the homes were not residential institutions for children and so could not be included.

A broader question being asked in recent days is whether the Mother and Baby Homes Commission report is likely to be the last of such reports into church-run institutions. The answer is “probably”, as a certain public fatigue has undoubtedly set in concerning such investigations.

Besides, the public is now seemingly inured to shock at their findings, even desensitised by the appalling revelations to date.

Next May will mark the 22nd anniversary of then taoiseach Bertie Ahern’s announcement setting up what became known as the Ryan Commission. It investigated the treatment of children in orphanages, industrial schools and reformatories run by 18 religious congregations.

Over the decades since, we have had five such reports exposing the dark side of 20th-century Ireland and its outrageous abuse of women and children, mainly by religious in religious-run institutions. The Mother and Baby Homes Commission report will be the sixth.

What is left? Some suggest that an investigation into forced incarceration of mentally healthy people in our State-run psychiatric hospitals up to the 1970s should take place. These, of course, did not involve any Church.

Already there have been some mitigating comments made in advance of publication of the report by the Mother and Baby Homes Commission. Last month, O’Gorman told this newspaper that details of a “massive societal failure” and misogyny that “permeated” Irish life for decades would be revealed when the report was published.

However, the failure was not by Irish society per se through those worst decades in the mother and baby homes up to the 1980s. It was by the forces that shaped that society and those were controlled by the Catholic Church.

Its rigid sexual morality shaped that society, as it had this State from its foundation in 1922 with the gradual dismantling of its original, more liberal constitution until its replacement in 1937 by something more “in the image and likeness” of the Catholic Church.

This is not about bashing the Church. It is simply the case, and as has been acknowledged by some of its most senior figures.

Just over 10 years ago, in December 2010, Archbishop of Dublin Diarmuid Martin visited Ballyfermot where he grew up. It was shortly after former priest Tony Walsh, one of the country’s most notorious child sexual abusers, was jailed. Such was the severity of his abuse of local children the concurrent sentences, if consecutive, would have amounted to 123 years.

In apologising to all concerned Archbishop Martin described the Walsh case as “a symptom of a deeper malaise within the Irish church”. It “had allowed itself to drift into a position where its role in society had grown beyond what is legitimate. It acted as a world apart. It had often become self-centred and arrogant. It felt that it could be forgiving of abusers in a simplistic manner and rarely empathised with the hurt of children”.

In the mid-decades of the last century, the Irish Catholic Church had become corrupted by its absolute power in a society of poor, ill-educated people and where its rigid views on sexual morality had been raised to the level of an ideology far removed from the compassion that is the hallmark of true Christianity. It was also deeply misogynistic.

The great irony is that in its quite shocking abuse of women and children its primary agents were also women. Its orphanages, Magdalene laundries and mother and baby homes were run by nuns. Nor is it an explanation to say these women were under the thumb of local bishops. Where bishops or priests were involved, it tended to be peripheral.

These brutal institutions were run by strong women, as witnessed by those of us who in 2005 and 2006 reported on public hearings of the Ryan Commission where some of them gave evidence.

Another tragedy in all of this is that as well as the many victims of the frequently casual brutality exercised in those institutions, the reputation of those kind nuns, priests, brothers and laity who relieved the pain and enhanced the lives of so many in Irish society was also tarnished.

They too should be numbered among the victims of that “self-centred and arrogant” institution which dominated so much of life in 20th-century Ireland. As Archbishop Martin said in that Ballyfermot sermon 10 years ago: “I must also however recognise the great work that was done through the church in this parish: by its religious, its priests, its committed lay men and women.”