Outbreaks of infection in nursing homes increases steadily over past month 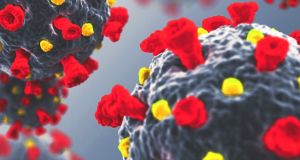 Prof Luke O’Neill says there is a “risk” the number of deaths per day could rise to 100 or higher.

The daily number of Covid-deaths will “inevitably” increase and could rise “exponentially” in coming weeks as numbers dying from the illness catch up proportionately with the surge in case numbers, experts warn.

Prof Sam McConkey, expert in infectious diseases at the Royal College of Surgeons in Ireland, said the daily death rate was not increasing at the same rate at the number of reported cases because those who contract the illness may not require hospitalisation for 10 to 14 days and may not become terminally ill for a further number of weeks. “So the deaths take several weeks to happen,” he said.

“The second possibility [as to why deaths remain lower than cases suggest] is that an increasing proportion of cases are among younger people in the 18 to 25 age group and they just get better.

“Unfortunately however, because we have just come through Christmas and it is a multi-generational celebration and families have been mixing with grandparents it is likely that some of those older people have contracted the virus.

“Though the first part of this surge has been among young people it is likely we will see numbers increase among older people.”

Immunologist Prof Luke O’Neill agreed there was a “risk” the number of deaths per day could rise to 100 or higher. The highest daily toll so far was on April 20th when 77 deaths were reported.

He said the Covid situation was a “maelstrom at present” and it was “highly unpredictable”. A small number of large outbreaks in nursing homes could push death rates even higher.

A potential positive in the current situation was that the new UK variant may be less lethal, despite it being more transmissible, he added.

Prof Kingston Mills, director of Trinity College’s Biomedical Sciences Institute, said: “It’s inevitable that we are going to see an increase in daily deaths as the daily [infection] rate has increased dramatically in the past two to three weeks.

“We won’t see the effect of the daily cases on death rates for 10 to 14 days.” He agreed the higher proportion of young people contracting the illness should help keep death rates down but added “getting the vaccine into nursing homes is really important, and we won’t see the benefit of the vaccine for a number of weeks after people get it”.

Prof Mills said society was “paying the price now” for opening up retail and hospitality in the weeks before Christmas and the failure until now to demand people coming into the country have a negative test.

Minister for Health Stephen Donnelly has said that indicators for new cases were improving, with a reduction in positivity rates, in the numbers of cases referred for testing by GPs and a fall in the number of close contacts.

The median figure for close contacts is now believed to be below three contacts per diagnosed Covid case, less than half than the median 6.3 contacts per person on December 29.

Speaking to The Irish Times, Mr Donnelly pointed out that while those indications were encouraging for new cases, there was a time lag between confirmed cases and hospital admission, a further time lag to ICU admissions as well as another lag to fatalities from the disease.

Meanwhile, a regional representative for the Irish Nurses and Midwives Organisation (INMO) has expressed concern about staffing levels at Letterkenny Hospital where there was a queue of ambulances on Sunday afternoon unable to deliver patients because of congestion in the Emergency Department.

Neil Donohoe told RTÉ radio’s Morning Ireland that at one stage there were seven ambulances in the queue outside the hospital and there had been concern about delayed care which could have led to “disastrous outcomes.”

Letterkenny hospital has been under pressure since before Christmas, he said. “There has been no let up.” While the vaccination programme provided “light at the end of the tunnel,” staff were “just burnt out,” he added.