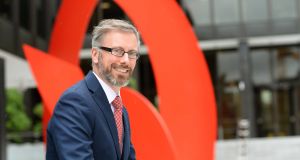 In an email sent to survivors on Sunday, Roderic O’Gorman said he was ‘deeply angered’ at the leak. Photograph: Dara Mac Dónaill/The Irish Timess

Minister for Children Roderic O’Gorman said he will seek an investigation into how sensitive details in the final report of the Mother and Baby Homes Commission were leaked into the public domain.

In a tweet published on Sunday afternoon, Mr O’Gorman said he will now be raising the matter with Government colleagues.

On Sunday Mr O’Gorman contacted the secretary general of the Department of An Taoiseach, Martin Fraser, to request an investigation be held into the leak. Mr O’Gorman is going to bring the matter up with Government colleagues at this week’s Cabinet meeting.

Taoiseach Micheál Martin is to make a formal State apology to survivors of the mother and baby homes in the Dáil on Wednesday. It will follow the publication of the Mother and Baby Homes Commission of Investigation Report, which is understood to say that 9,000 infants died in those institutions after 1922.

A spokesman for the Taoiseach confirmed that the final report of the commission will be presented to survivors on Tuesday.

The report has also stated the status of “illegitimacy” until 1987 was an “egregious breach of human rights”.

The spokesman said it was more likely the apology would be delivered the following day, Wednesday, when the Dáil resumes after its Christmas break.

On Tuesday, the Cabinet will discuss the report and is expected to discuss a number of urgent actions which it will take.

These include the immediate prioritisation of the Adoption and Tracing Bill which allows adopted children gain access to information about their birth mothers.

The Taoiseach, who has read the report, said he found its contents shocking and difficult to read.

The experience faced by mothers and infants in those circumstances was “extraordinarily sad and cruel”, he told The Sunday Independent.

The report found that infant mortality in these institutions was twice as high as for the same types of children in wider society.

The Cabinet is also expected to ask Mr O’Gorman to set up an interdepartmental group to explore the issue of redress for survivors, both mothers and children.

In an email sent to survivors earlier on Sunday, Mr O’Gorman said he was “deeply angered” at the leak of the report details to The Sunday Independent.

In a letter sent to survivors of the homes on Sunday, Mr O’Gorman said it had always been his intention that survivors should be the first to hear of the main conclusions of the commission’s report, and the actions the Government plans to take on foot of it.

“My department has worked hard to maintain the confidentiality of the report prior to publication, and to arrange for the first public airing of its contents to be with survivors in the online forum being hosted by the Taoiseach and myself on Tuesday, following the Cabinet meeting.

“I was deeply angered to see details of the report leaked in a newspaper this morning. I am very sorry that many of you have found out elements of the report in this way. It is not acceptable.

“I will be engaging colleagues across Government to ensure that no further information becomes public until the official publication on Tuesday.”

Sinn Féin leader Mary Lou McDonald described the leak of details as “grossly irresponsible” and unacceptable, given the survivors had not yet been told of the report’s contents.

Speaking on This Week on RTÉ Radio, Ms McDonald said it would have been far better for victims to have had access to the document for a few days given the length of time the process has taken.

“The concern will be for a lot of people that there is a little bit of media handling in advance,” she said in relation to the leak.

She said an apology and acknowledgement by the State of its failings was “absolutely central and long overdue”.

The Social Democrats said the leak was a clear breach of the process for publishing the report outlined by Mr O’Gorman in December.

Its spokeswoman on children and youth affairs, Jennifer Whitmore, said it was “extremely disappointing” the leak had occurred.

“Survivors were given clear assurances about how the release of the report would be handled. The publication of details of the report in the media today flies in the face of this.”

Ms Whitmore said the clear process was that there would be the Cabinet discussion, and then there would be a private “webinar” held between Mr O’Gorman, the Taoiseach and survivors. Only then would the report be published and would a press conference be held.

Responding to the latest developments, former minister for children Katherine Zappone said she would not comment on the report at this time, out of the respect she holds for the survivors and residents of the institutions in question. “I met many of them, often, over the four years I was minister for children. Their stories are heartbreaking, and must continue to be told and heard. They are resilient people. I think it is time for the whole of Irish society to listen to their voices first,” she said.

“I wish them strength and courage for the days, weeks and months ahead. My wish, as it always has been, is that they receive justice, that beliefs, systems and laws change, and that we never forget,” she added.

A spokesman for the Taoiseach said: “We understand the Minister of Children’s concerns and we will discuss these further at a Government level.

“It is important, as we have previously stated, that we respond to the needs of survivors with a comprehensive suite of measures upon publication of the report.”