Volunteers with Claddagh Watch Patrol walk along the Corrib three or four nights a week, keeping an eye out for people disorientated or distressed near the water. Video: Kathleen Harris 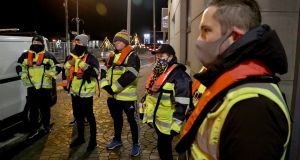 It’s easy to spot Jimmy McGovern on O’Briens Bridge. He stands out in a high-vis jacket, personal flotation device over his shoulders, radio clipped to his side. His job is simple enough: stop people entering the water.

A volunteer with Claddagh Watch Patrol, he is on duty tonight for an organisation that started operating along Galway’s waterways in July 2019 after five people lost their lives to the river – three accidents, two suicides – the previous January.

Something had to be done, says Arthur Carr, one of the co-founders. They recruited volunteers to walk along the Corrib, three or four nights a week, keeping an eye out for people disorientated or distressed near the water. They look out for people who appear upset or alone, people who might have been separated from their friends, anyone intoxicated or passed out by the riverbank. Most of the time they simply chat to them and move them away from the river.

More than 80 volunteers work with the organisation. They all receive first-aid and mental health training and are expected to do about one shift a month. Carr is eager to point out they are not a suicide-prevention organisation – although that’s a big part of it – because “a staggering amount of deaths on the river are accidental”.

At 8pm, tonight’s eight volunteers are divided into groups and assigned areas to patrol. The briefing from Carr is short and simple: look after yourselves, basically. “If you see somebody and you think you can deal with it, deal with it; if not, get on the radio.”

Carr (57) is a no-nonsense guy, who says one of the most important things a volunteer needs is to be able to exercise a bit of cop-on when approaching someone.

Normally the organisation patrols from 10pm until 4.30am, with a particular focus on nightclub closing time. But because of Covid-19 restrictions, they changed their hours from 8pm until just after midnight.

After the briefing, Jimmy McGovern and Eoghan Crowe head towards the canal, a short walk west of the river, and follow it past the back of the Róisín Dubh pub. They cross a footbridge spanning the remnants of an old lock gate and from there continue along Mill Street to O’Briens Bridge, where they pause to chat to some of the other volunteers.

It’s a clear night, 6 degrees with a northerly wind. “It’s cold,” says McGovern, shaking out his hands. The water surging under the bridge is also about 6 degrees but your body loses heat to water 25 times faster than it does to air. The volunteers themselves never enter the water. Part of their role, says McGovern, is to act as “eyes and ears” for the emergency services, alerting them when someone ends up in the river. He says the fire brigade can launch a rescue boat in less than two minutes.

'We’re only asking people if they’re okay and seeing where the conversation goes from there. We’re just here to help them'

The organisation, says Carr, has made at least 86 serious interventions since July 2019. This is where the emergency services have been called to deal with a situation.

McGovern says about 23km of waterways course through Galway city. Now he and Crowe turn off O’Briens Bridge and continue along a narrow walkway sandwiched between the river and a small canal. They walk along the dimly lit thoroughfare as far as the Salmon Weir Bridge and turn back. It’s quiet. A few Deliveroo cyclists whizz up and down but that’s about it. On the way, Crowe stops to chat to a young man sitting alone on a bench.

“We’re only asking people if they’re okay and seeing where the conversation goes from there,” says McGovern, adding that the volunteers meet a lot of distressed people at night. “We’re just here to help them.”

McGovern (26) moved to Galway from Kinnegad in 2012 to study maths and sociology and politics at NUIG. He joined the students’ union and now works in student welfare, where mental health is a big part of his job. He’s been with Claddagh Watch since the start, pretty much, and volunteers as a supervisor on the patrols.

Back from the brink

He has experienced a lot in those 18 months. He indicates the walkway where we’re standing and says that on four occasions he has met people here who told him they intended to end their lives. He’s pulled people back from the brink, literally.

How does he deal with that himself? “There are things that people have said to me that have been very difficult to process,” he says. At the end of the night the volunteers ask if anyone is feeling troubled by anything. There are counsellors available and the volunteers are strongly encouraged to use those services.

“We don’t take it home with us,” says McGovern.

But the volunteers describe the work as very fulfilling. “I absolutely love it,” says Crowe.

The public seems to appreciate it as well. As McGovern is speaking, three young women enjoying a night out approach him.

“Thank you so much,” one of them says. “Where can we donate?”

They walk off, thanking him again as they go.

During the winter when it has 16 gates open, the Corrib is one of the fastest-flowing rivers in Europe and it is a savage beast. It’s mother nature at its most wild

As McGovern talks, Carr’s voice sounds over his radio. He describes a young man he’s spotted wandering around on his own; he gives a physical description. Keep an eye on him, he says.

Nearby, Carr’s wife, Deborah, sits in a Claddagh Watch Patrol van, which has been sponsored by a local dealership. She runs the organisation with Arthur, focusing on the administration side, co-ordinating the volunteers, filing incident reports.

At 10.15pm volunteers Betty Hernon, a deputy school principal, Robert Munn, a college lecturer, and Alan Grealish, a graduate, walk down the Long Walk near the mouth of the Corrib. “We thought tonight would be busy, what with it being the last evening before lockdown,” says Hernon.

A young man stands outside a terraced house, having a smoke by the water. “I love what you’re doing,” he tells the volunteers as they pass.

They continue to the end of the Long Walk, as far as a pier where a group of youngsters are hanging out drinking, away from the prying eyes of the city.

“I think the waterways in Galway are a massive contribution to the city,” says Grealish, who, as a kayaker, has explored them in more depth than most. “But at the end of the day the Corrib, the Lower Corrib as I would call it, the main river that flows through O’Briens Bridge and Wolfe Tone, during the winter when that has 16 gates open, that is one of the fastest-flowing rivers in Europe and it is a savage beast. It’s mother nature at its most wild. It needs to be respected.”

The volunteers continue until shortly after midnight, when they call it a night and head back to their base near the Róisín Dubh for a debrief. Tonight there have been no incidents.

Carr estimates the organisation has clocked up 4,500 hours patrolling the city’s waterways. “With Covid, the hours have increased if anything – we’re putting in more nights a week,” he says.

“We live and breathe it,” says Deborah. “It’s pretty much all we do.”

It hasn’t gone unnoticed. In December, Arthur and Deborah received the Christine Buckley Volunteer of the Year award. But perhaps more significant is the recognition they receive from some individuals at night.

Earlier in the evening, McGovern walked up to the Claddagh Watch van with two €50 notes and gave them to Deborah. A young man had handed them to him as a donation. McGovern told him it was too much. No, the lad said, “You guys took care of me one night, I just wanted to say thank you.”

If you are affected by any issues raised, please contact Pieta House on 1800-247247 or the Samaritans by telephoning 116123 for free, or by emailing jo@samaritans.ie