Minister says it would be inappropriate to publish 3,000 page report before Christmas 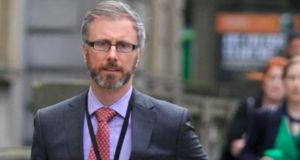 Minister for Children Roderic O’Gorman said he is aware of plans to build more than 200 apartments on a parcel of land near the Bessborough home which campaigners believe overlaps a children’s burial plot. File photograph: Gareth Chaney

Minister for Children Roderic O’Gorman has confirmed that he will publish the report of the Commission of Investigation into Mother and Baby Homes in the second week of January.

The 3,000 page report was originally due to be published this month but the Minister said it would not be appropriate to do so before Christmas.

Mr O’Gorman also expressed concern about the planning application for lands attached to the Bessborough Mother and Baby Home in Cork.

“I’m not going to say more about it now but I’m very aware of what’s happening there,” he said in the Dáil on Thursday.

The commission, established in 2015, investigated the treatment and abuse of women and children in 18 mother and baby homes and four county homes over a period of decades until the 1990s.

Speaking during question time in the Dáil, Mr O’Gorman said he had been talking to a significant number of survivors who expressed different views about publication.

“This Christmas is going to be a difficult and unusual Christmas and with the significance of this report it was clear to me that bringing it and publishing it close to Christmas wouldn’t be appropriate.

“That’s why we’re giving clarity today that we have a specific date, the second week of January.”

He also said he planned to bring a memo to Cabinet in the week of January 11th on the general scheme or the Institutional Burials Bill and refer it to the Oireachtas Committee on Children for pre-legislative scrutiny.

The Bill aims to ensure that respect and dignity are afforded to the children who are buried at the site in Tuam, Co Galway while at the same time seeking to balance the action required to achieve this with the need to minimise disruption for those who live in the vicinity.

Galway historian and campaigner Catherine Corless told the Irish Examiner that she feared Cork’s Bessborough site could have similar burial practices to those in Tuam where she established that 796 children were buried in a septic tank at the former home.

A developer plans to build more than 200 apartments on a parcel of land near the former home which campaigners believe overlaps a children’s burial plot.

Sinn Féin spokeswoman on children Kathleen Funchion referred to the planning application and said “people are concerned that works are going to go ahead”.

Ms Funchion said the Bill should be passed before any works are permitted.

The Minister told her “I’m aware of the planning application. I’ve engaged with one of the leading survivor groups for survivors from Cork”.

He told her he did not want to say anymore at this time but he was fully aware of the application.

Ms Funchion also said it was absolutely vital that the correct counselling supports are put in place.

She said the 3,000 page report would be very difficult reading and it was important that there were “trauma specific counsellors” dealing with people and services available specifically to survivors and not added on to already overburdened services.

Mr O’Gorman said those counselling services would be put in place.

The Minister also said that survivors on the departmental mailing list were mailed this morning with information.

The commission report “will go to Cabinet that week and following that meeting the Taoiseach and I will host a webinar solely for survivors and we’ll discuss and bring out the major conclusions of the report for survivors and it will only be after that that we’ll do a press conference for the general public”.