Payments to landlords surge as social housing scheme rolled out 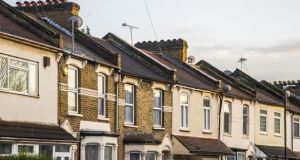 South Dublin County Council paid out the most of any local authority. HAP tenancies in the county cost the State €22.1 million on a net basis – after payments from tenants – in 2017. Photograph: Getty Images

State payments to private landlords in Dublin under housing assistance payment (HAP) surged in 2017 as the Government rolled out the State-subsidised scheme nationally to house social housing tenants.

The figures show the Government’s heavy reliance on the private rental market to provide social housing to people already in receipt of rent supplement or families on waiting lists for social housing.

Under HAP, local authorities pay rent directly to private landlords on behalf of social housing tenants and charge tenants a differential rent based on their income and ability to pay.

The 2017 figures show that local authorities paid private landlords a total of €193 million – up from €74 million in 2016 – and recovered €51 million from tenants, leaving the net cost to the State at €142 million.

South Dublin County Council paid out the most of any local authority. HAP tenancies in the county cost the State €22.1 million on a net basis – after payments from tenants – in 2017.

There were just more than 32,000 active HAP tenancies at the start of this week. The figure is expected to rise to more than 80,000 by 2021 under the Government’s Rebuilding Ireland strategy.

Rent supplement payments, administered by the Department of Social Welfare, have fallen from €338 million to €253 million in 2017 as tenants make the switch to the HAP scheme.

Mike Allen, director of advocacy at homeless charity Focus Ireland, said that the rising figures show that the Government was “almost entirely reliant on the private rented sector to provide social housing”.

“The Government presents these figures often in a celebratory way as if it was an intended social housing policy,” he said.

“If it was to acknowledge the fact that this is the legacy of the mistakes of the past and things that we need to removing way from, it would give confidence about where we are going.”