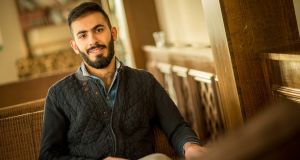 Rakan Al-Zahab, a Syrian refugee living in the Abbeyfield Hotel in Ballaghaderreen, Co Roscommon. “I want to put my feet on the ground.” Photograph: James Connolly

Next week, after months of living apart, Rakan Al-Zahab will finally be reunited with his wife Selma. Or at least, that’s what he’s been told. Al-Zahab, who arrived in Ireland from Greece in February 2016 and has spent the past 10 months living in the former Abbeyfield Hotel in Ballaghaderreen, no longer trusts the updates on his housing situation or his wife’s arrival in Dublin.

“They’ve told her she will be coming here on December 1st but I can’t believe them because they’ve been saying she’ll arrive next week since last June.”

He’s also facing the prospect of being separated from his wife once she arrives. Al-Zahab, who has been given leave to remain in Ireland, was recently offered accommodation in a private home in Dublin. However, he says officials from the Department of Justice say his wife must stay in one of the State’s Emergency Reception & Orientation Centres until her refugee status is approved.

“If I take the accommodation she can’t follow me because the law says you can’t leave the centre until you have your status. They’ve told me they can bring her to Ballaghaderreen but I’d have to spend another year in the centre. I’ve already had three years of suffering, I want to put my feet on the ground.”

Al-Zahab left his home in Damascus, Syria in June 2014 and met Selma in a Greek refugee camp after crossing the Aegean Sea by boat. The couple were married in the camp, although Al-Zahab says they have yet to formally register the union. Al-Zahab says his wife has been asked to sign an agreement before leaving Greece stating that she will accept whatever accommodation is offered to her in Ireland and acknowledging that her asylum process could take up to a year.

“I want to tell them please help us. If I can’t live with her I don’t know what I’ll do. I want to get out and start my normal life again.”

When Maisa and her family arrived in Ireland last December they were told they would be moved into private housing within three months. Nearly a year later, the family is still living in the Mosney direct provision centre.

“For the past three to four years we haven’t been settled at all. Coming here and staying in Mosney is not a permanent solution and leaves us upside-down. I have tried my best to keep busy at all times but staying in Mosney can really make a person depressed and frustrated. We keep packing and unpacking, it’s really hard.”

Maisa, who prefers not to give her full name, recently began a special university pathway course in UCD which will allow her to apply for a scholarship to study a degree in business in 2018. She spends two hours each morning and evening travelling to and from the direct provision centre in Co Meath to her classes on the south Dublin university campus.

“I’ve been searching for weeks to find a room near UCD but I was worried if my family was relocated to Dublin I wouldn’t need the room. We are one of the only Syrian families left in Mosney without any knowledge about our housing.

“We were told when we arrived that it would take three months to move into a house. Our refugee acceptance finally arrived in June this year but the process has taken really long. Having some information about where we are going would at least give us satisfaction and peace that we will soon have our own place.”

Fidaa had been in Ireland more than six months when he contacted the Irish Red Cross looking for a place to live. The Syrian dentist was living temporarily in the Mosney direct provision centre and filled his time by volunteering at the Irish Deaf Society shop in Drogheda. However, he was eager to move to the capital where he hoped to begin practising as a dentist again.

In July, a caseworker from the Irish Red Cross introduced him to a couple in Dublin who had pledged a room in their house to a refugee. A few weeks later Fidaa, who prefers not to give his full name, moved into his new home.

“I was so nervous at the beginning but I guess they were too. Maybe even more so than me because it’s difficult to accept a strange man into your house when you have no idea what he’s like. But they were so friendly and wanted to make me feel at home. They said to me all the time, ‘just consider yourself at home here. Don’t feel like a guest because you are not.’”

In the nearly four months Fidaa has spent living with the Irish couple his English has improved dramatically. They now take turns cooking dinner and eat together every evening. “We watch the TV after dinner and watch the news. If there’s a news report that I don’t understand they explain the background to me.”

Fidaa is attending English classes in the city centre and works part-time in Penneys. However, he says living with an Irish family gives him an understanding and appreciation of Irish culture that he could never gain from a classroom. “They’re not just a host family anymore, they’ve become my real family.”

The Irish Red Cross is still accepting offers of accommodation for refugees across Ireland. If you’d like to offer a room, visitregisterofpledges.redcross.ie