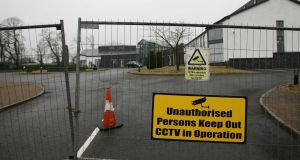 Site for Emergency Reception and Orientation Centres for refugees in Ballaghaderreen, Co Roscommon: only additional centre sourced from nearly 100 properties offered in two separate public tendering processes in 2015 and 2017.

The Minister of State for Immigration was forced to “directly intervene”with Minister for Health Simon Harris after his department failed to provide sufficient funding for refugee medical treatment, newly disclosed records reveal.

Internal Department of Justice communications over the course of 2017 paint a stark picture of the State’s ability to cope with the rise in the number of people seeking asylum in Ireland.

The Government committed two years ago to accept 4,000 refugees and asylum seekers from Greece, Italy and Lebanon. More than 2,000 of them will have settled here by early next year.

The struggle to provide services to refugees arriving under relocation and resettlement programmes has emerged as a “very significant issue”, according to a private briefing paper prepared for the Minister for Justice in July, with officials voicing “deep concerns” over healthcare in particular.

The documents illustrate tensions between Government departments in relation to the healthcare issue, with Minister of State for Immigration David Stanton forced to “directly intervene” with Minister for Health Simon Harris over funding requests for refugee healthcare provision in early 2017.

“No budget has been allocated to the IRPP [Irish Refugee Protection Programme] by the D/Health except for dormant account funding,” reads an internal note from April.”

“Hence, significant problems continue to emerge around lack of proper medical treatment for the refugee and relocation cohort,” the note continues.

“Specific funding by D/Health is essential if the HSE is to meet the specific health requirements of the cohort in EROCs [Emergency Reception and Orientation Centres].

“It might be noted that D/Health are the only department not to assign additional resources to the IRPP.”

An extract from the July briefing provides no indication of any improvement: “The absence of a budget for the HSE is causing significant problems in areas such as dental treatment, access to healthcare and in other areas. It is also giving rise to immense frustration amongst the client group.”

It adds the difficulties are being worked through on a collaborative basis between Government departments, but that “all of these issues are only going to be magnified as numbers increase and as we open more EROCs” with over 2,500 people still yet to arrive, as per latest figures.

Fiona Finn, head of Nasc, the Irish Immigrant Support Centre, said the State was given advance notice of the number of families arriving from Greece and Lebanon and thus had plenty of time to prepare the necessary healthcare support.

“It is deeply concerning to learn of the lack of money for the HSE to address the critical health needs of a comparatively small number of families, particularly when we contrast that to the numbers arriving for example in Germany,” said Ms Finn.

The documents also highlight a sense of increasing exasperation among departmental officials over the failure to procure further EROCs to ease capacity issues.

Just one additional centre in Ballaghaderreen, Co Roscommon, was sourced from nearly 100 properties offered over the course of two separate public tendering processes in 2015 and 2017.

The response to the latest tender was said to be particularly “disappointing” with just 12 offers received. Many of the properties were deemed to be too small, unsuitable or in a state of disrepair.

Issues of public stigma also come to the fore, with a reference to a scoping visit to the disused Fairways Hotel in Dundalk which prompted “negative feedback from [the] local population and media”.

The Department of Justice also canvassed the Office of Public Works for a list of State properties that could be used as EROCs, but none were deemed suitable “as they are largely listed buildings or premises that would require lengthy and costly refurbishment”.

Brian Killoran, head of the Immigrant Council of Ireland, warned that the lack of housing options was forcing asylum seekers into living “for extended periods in effectively institutional situations in direct provision, long after they are eligible to move on”.

“It’s crucial to understand these situations are not caused by inward migration but instead by the long-term, systemic failure to invest in housing,” said Mr Killoran. “This is a State failure to forward plan for the changing demographics and overall population needs.”

The Department of Justice did not respond to a request for comment from The Irish Times.