Artist first began contributing cartoons to ‘The Irish Times’ in 1971 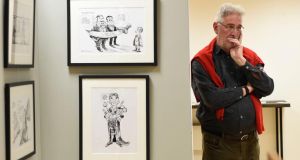 Martyn Turner stands by examples of his work on display at CHQ in Dublin Photograph: Dave Meehan/The Irish Times

The “genius” of Irish Times satirist Martyn Turner was hailed at the launch of an exhibition of his work over the past four decades.

This retrospective looks at his work under a number of themed headings from society to politics.

Prof Ferriter said he has a unique talent for summing up Irish society as he is an outsider who was born in the UK.

“He’s commented himself; how do you explain us voting for people who need to be prodded into action by a People’s Assembly that wasn’t elected by anybody – as a statement on Irish politics, it’s a very accurate one,” he said.

“As an historian, his work is an essential reminder of change and continues and the bizarreness of the political world. He captures that so well,” he said.

“Martyn has been asked in the past to explain himself – he does not like explaining himself. But he has said, this is my proper job. Drawing silly pictures. Yes, it’s a queer thing for a grown man but the alternative was to teach your children geography,” he said.

“We have been exposed to his genius for 45 years now. It’s a sustained excellence and it’s unmatched,” he said.

“We have got used to patting ourselves on the back about the enormous strides we have made in becoming generous about our multi layered history. The presence of a magnificent sculpture in St Stephen’s Green, the Haunting Soldier, seems to be another indication of that maturity and of the many allegiances of 100 years ago until some clowns decided they were going to deface it with red paint,” he said.

Recalling one of Mr Turner’s most famous observations on Northern Ireland, Mr Ferriter said; “Tribal bigotry and intransigence in Northern Ireland were the backdrop of so much of Martyn’s work in through the years.”

The free exhibition of Mr Turner’s cartoons takes place as part of the Jonathan Swift Festival in the EPIC Museum at CHQ in Dublin from November 29th to December 7th.