Unaccompanied minors arriving in Ireland up by 80% 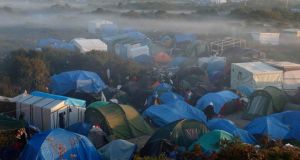 Fog hangs above tents and makeshift shelters in a field where migrants and asylum seekers stay in Calais, France, October 2nd 2015. Most of the unaccompanied minors arrived in Ireland from Calais or Greece Photograph: Pascal Rossigno/Reuters

The number of unaccompanied minors referred to social services after arriving in Ireland has risen by more than 80 per cent in recent years, new figures show.

More than half of these young people, who arrive in Ireland unaccompanied by a parent or a responsible adult, were between 16 and 17.

The majority of young arrivals come from Afghanistan, Eritrea, Iraq, Syria and Ethiopia, however unaccompanied minors from Nigeria, Libya, Morocco, Georgia, Iran, Sudan and the Democratic Republic of Congo have also been referred to Tusla.

Most unaccompanied children arrive in the country 'spontaneously' seeking protection from conflict, persecution or serious harm, or to reunite with family

The ESRI report, Approaches to Unaccompanied Minors Following Status Determination in Ireland, published on Tuesday, warns that many of these children are being transferred directly from care into direct provision once they turn 18 without adequate aftercare and support.

If a child secures immigration status before turning 18, the system works well for them, said Sarah Groarke, lead author of the report. However, “the vast majority face numerous challenges when they leave the care of the State” and go into direct provision without resolving their status.

The report attributes the increase in unaccompanied minors arriving in Ireland to both the global rise in people seeking protection and Ireland’s recent commitment to accept minors from Greece and Calais.

Most unaccompanied children arrive in the country “spontaneously” seeking protection from conflict, persecution or serious harm or to reunite with family members, while a smaller number have come here as part of dedicated schemes.

As of May 2017, 22 had arrived from Greece under the EU relocation scheme and 41 came to the country as part of a special project which committed to bringing up to 200 unaccompanied minors previously living at the Calais refugee camp to Ireland.

The majority of those arriving from Greece and Calais were granted refugee status on arrival or a shortly thereafter.

Most children arriving here alone will not receive a decision on their application for international protection before the age of 18, warns the report. Those who do not secure status by the age of 18 have reduced access to support compared to those who do receive protection.

All unaccompanied minors receive care “on a par with other children in the care system” and are placed in foster care, supported lodgings or residential units.

While deportations of unaccompanied minors “do not normally take place in practice”, the report warns that the uncertainty around the asylum process has created a fear among children under 18 of being deported.