People express their views on the 'repeal the eighth' referendum at the anti-abortion campaign national conference today, December 3rd, at the RDS in Dublin. 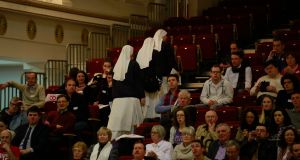 Any referendum on repealing the Eighth Amendment will inevitably lead to abortion on demand in the Republic even if the wording is restrictive, a anti-abortion convention in Dublin has been told.

The Joint Oireachtas Committee on the Eighth Amendment, the Citizens Assembly and the media were all repeatedly castigated by speakers and by delegates attending the Pro Life Campaign’s National Conference for the partisan manner in which – it was claimed – they misrepresent the debate .

Lord David Alton, a long-time anti-abortion campaigner and a member of the British House of Lords, said the “law of unintended consequences” which had seen Britain move from a restrictive abortion regime when legislation was introduced 50 years ago to one which sees “an abortion carried out every three minutes” would be replicated in the Republic.

“It was a law that was only supposed to be is used in very extreme circumstances but of course it is now an open-ended law and is it has lead to massive destruction and loss of life,” he said.

When asked about the wording of the referendum he expressed the hope it would be “a straightforward question: Are you in favour of British-style abortion laws or not? Because that’s what you will get even if it is introduced for very narrow circumstances. You will end up with legislation we have in Britain. So it should be a straightforward question that is put to the people of Ireland.”

Cora Sherlock criticised the Oireachtas Committee on the Eighth as “very biased and imbalanced”,and she accepted that the referendum campaign would be divisive.

“When it comes to abortion there is always high emotions , that is just the reality because it is a life and death issue,” she said.

She accused the media of repeatedly misrepresenting the anti-abortion side of the issue.

“If we were to look at changing any other law we would look and see how it has affected other countries. But when we look at abortion, when you look around the world, what you find is that when you introduce abortion in any way it settles down to generally one in five pregnancies ending in abortion.”

She said she had frequently been asked about her preferred wording for a referendum but said “the reality is the wording doesn’t matter to people who want to see the baby protected and mothers protected. Because we have no doubt that when the wording is announced by the Government it will be presented as something very restrictive, very attractive to voters but that’s what happened in England.”

Emma Maloney told delegates of her own unplanned pregnancy and her decision to have the baby and she suggested had abortion in Ireland been an option she “could easily have made a decision I would have regretted forever”.

She called for more to be done to support women experiencing crisis pregnancies and – to a standing ovation – concluded he address by saying “you don’t have to have an abortion in order to get through the darkness and back towards the light”.

Liz McDermott of One Day More, a support group for families who received poor prenatal diagnoses for their babies, was critical of the Oireachtas Committee on the Eighth where she made a presentation last month.