Charity homelessness single reminds us ‘we all fall down’

Christy Dignam and Shay Healy among those contributing to Christmas fundraiser 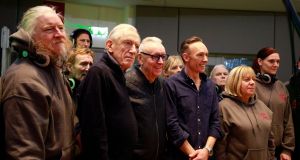 Artists including Christy Dignam of Aslan, Shay Healy, Frances Black, Don Baker and the High Hopes Choir have come together to record a charity single for Christmas, with all proceeds going to homelessness charities.

Titled We All Fall Down, it will have its first public airing on Friday night’s Late, Late Show and will be available for download sale from Friday. The song, written by Glen Baker – Don Baker’s son – was recorded in Dublin’s Windmill Lane studios on Sunday.

Artists came and went throughout the day, each recording their contribution to the finished product, which will be mixed and produced this week.

Keith Troy of the Irish Housing Network, who came up with the idea, said he had heard the song a number of years ago and contacted Glen Baker about recording it for charity. Baker said he had written it after a conversation with a homeless man he regularly saw near his home in Ballybough, Dublin.

“I came home, picked up the guitar and this song poured out of me. It’s a ballad I suppose, about how we do all fall sometimes, about how it could be you or me on that street corner, but it’s also about hope.”

Among those waiting to go into studio was Alison Sweeney, a member of the High Hopes Choir for more than three years.

“I became homeless after coming out of hospital about 3½ years ago. I saw a sign on the wall in Focus Ireland about the choir. I love it. I had always sung and it was part of my life I had gone away from. Singing just makes me feel good inside.”

Still homeless and living in shared ‘temporary’ accommodation, she says she does not “understand how the Government can let homelessness go on”. She hoped the single would “go to number one” and increase awareness of the issues.

We All Fall Down will be available on iTunes and other platforms, costing €2.99 with all proceeds going to the Peter McVerry Trust, Simon, Merchant’s Quay Ireland, Focus Ireland and Inner City Helping Homeless.

1 Election 2020: 10 key questions to ask candidates on your doorstep
2 Election 2020: Peter Casey to stand in both Donegal and Dublin West
3 Which jobs do teenage girls and boys aspire to have by age 30?
4 Eyewitness to Auschwitz: ‘We were held in the wagons like animals’
5 Eating out in Dublin – the homeless way
Real news has value SUBSCRIBE