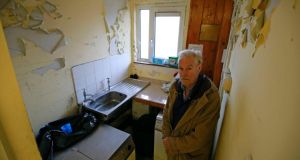 A group of more than 30 pensioners, living in dilapidated council-owned bedsits in Dublin, say they have lost hope of ever having decent homes.

They say they have been promised, for almost a decade, that the one-bedroom and studio flats at Jamestown Court in Bluebell would be modernised and refurbished. They remain, however, damp, cold and dark.

The three, two-storey blocks, one of which lies empty and boarded-up, are in disrepair, with paint peeling badly from outdoor railings and ceilings. Grass and hedges are overgrown. A small communal laundry room is cold and damp, with paint falling from walls and ceiling. A small bathroom within the laundry room is so filthy, the toilet seat broken, as to be unusable.

Plans by Dublin City Council to refurbish the flats since 2007 were cancelled during the recession. Since the recovery, the older people’s housing charity Alone has agreed to take over Jamestown Court, and regenerate the flats. These plans too have hit obstacles, particularly due to a lack of legal clarity over the title to the land.

John Duncan’s bedsit – a small living-cum-bedroom, with a tiny kitchen and shower room – is reminiscent of an early 20th-century tenement. A single bed sits against one wall, a small table and two chairs beside it, with a two-seat couch and armchair on the other side. It has little natural light, paintwork is stained and dark, and it is cold.

“The draught coming in in the winter is awful,” the 64-year-old says. “I hang this blanket to cover the front door. Feel it.” The blanket is cold and damp.

His cramped shower room “was very bad”. Two months ago he washed and painted the walls but dark green mould is reappearing on the walls and ceiling. “It was black with mould. There were mushrooms growing.”

He has lived here for nine years, paying €30 a week in rent out of his disability pension of €208.

His voice wheezy at times, he says he has been on a number of antibiotic courses for chest infections. He gets out for a walk most days, though spends most of his time sitting at the small kitchen table.

His neighbour, Noel McDonald (67), who retired from the army after a tour of Lebanon nine years ago, has never had central heating. His slightly larger one-bedroom flat is brighter than John’s and filled with posters, photographs and Elvis memorabilia. On an early December morning, however, it is oppressively cold.

“I have that,” he says pointing to a small blow-heater, “and I turn on the oven with the doors open for 20 minutes in the morning. Sometimes I have to sleep with my clothes on it gets so cold.”

A previous tenant left an unpaid gas bill of more than €1,000. To have the gas reconnected, which would entail some repair work, would cost him “about €500. So I’m snookered,” he says. He pays €57 a week rent.

“It embarrasses me when I bring my grandchildren back. They come to stay with their dad. The girls sleep in my bed. I have to put four hot-water bottles in for them. I’d like the council to do the place up.”

Tommy Coombes, co-ordinator of Bluebell Community Development Project, an advocate for the tenants, says they feel “brushed off and ignored” by both Alone and the council. “They have lost hope. We’re not talking about people wanting favours here. This is about people’s human right to live in dignity.”

A spokeswoman for Dublin City Council said transfer of the land had been “delayed” due to the title problem but “good progress” had been made and the council was “confident Alone will get on site and carry out this important development” in early 2018.

Pat Doherty, head of housing and development with Alone, gave a commitment the redevelopment would begin in coming months. Asked about these reassurances Mr McDonald shrugs. “I don’t believe anything they say any more.”

£1,000 pay rise for NI politicians a ‘slap in the face’ for workers 15:28
Man charged with baby’s murder left him alone to visit casino, court told 15:23
Son who kicked father to death was ‘provoked’ by a ‘controlling’ father – court 15:18
Lack of resources will leave gardaí ‘without armed backup’, says GRA 15:06
Taoiseach claims Sinn Féin not ‘a normal political party’ 15:03