Members to give recommendation on whether abortion ban should be repealed 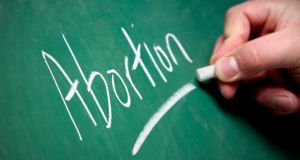 The Oireachtas committee on the Eighth Amendment to the Constitution, which gives effect to the State’s abortion ban, will vote in two weeks on whether the amendment should be repealed and what law, if any, would replace it.

It will publish a “brief” report making its recommendations to the Oireachtas on the amendment on December 20th.

Committee chair Senator Catherine Noone told members they would be presented with a “roadmap” on Thursday of how they could reach their decisions.

They will spend next week discussing what changes to the law they might support, before voting the following week on December 13th. A number of committee members indicated on Wednesday that voting on the issues should be left until the end of the committee’s work.

Ms Noone said the committee would produce a “reasonably short report”, which would nonetheless be “comprehensive”.

The committee held two sessions on Wednesday, with presentations from Peter Thompson, a consultant in foetal medicine at Birmingham Women’s and Children’s Hospital, and from officials from the Departments of Education and Health in relation to sex education in schools.

He said that as with the ever-changing progress in medicine, conditions would need to be added and removed from such a list on a regular basis.

He “strongly” advised against being prescriptive and using the term “lethal abnormality” as there was no agreed definition as to what lethal actually meant.

Mr Thompson said that of the 3,265 citizens of Ireland, some 141 travelled to England or Wales to have an abortion under ‘clause E’ of the Abortion Act there, which provides for termination where there is a substantial risk that if the child were born it would suffer from such physical or mental abnormalities as to be seriously disabled.

Mr Thompson suggested the medical profession here would want “some support from the legislature”. In the UK, he said, two independent clinicians must come to their decision on a diagnosis “in good faith”.

With regard to setting a lower gestational limit for the availability of abortion, he said that generally speaking those who were less privileged in society would present later and therefore be disadvantaged. This included poorer women and refugees.

The committee also heard that some conditions, such as microcephaly, where the brain is not growing normally, usually only presented after 24 weeks’ gestation.

Mr Thompson also told the committee that it was “very difficult” for Irish women travelling to the UK and that they did require some counselling. He was concerned that they did not get the follow-up they needed afterwards.

“If you have a foeticide performed then there should be some feedback with the person who did it,” he said.

Asked by Senator Ronán Mullen if he accepted that people would be “chilled to the marrow” by his description of foeticide and if he also accepted that he had a “whole different world view” on abortion, Mr Thompson said he had differing opinions on many aspects of life.

He accepted that there were many people who had a child with Down syndrome who had brought much joy into their lives. But he believed in cases of “serious and significant abnormalities” that “women should have choices”.