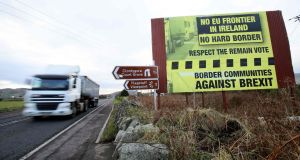 In a letter published in Monday’s Irish Times, the 16 signatories from both sides of the Border, say with Brexit negotiations at “a critical moment... fundamental questions about human rights and equality are at stake”. Photograph: AFP/ Paul Faith/Getty Images

All parties involved in Brexit negotiations must give “written guarantees” that the human rights and equalities currently guaranteed to people in Northern Ireland will be respected and maintained, a group of leading human rights organisations and experts has said.

In a letter published in Monday’s Irish Times, the 16 signatories from both sides of the Border, say with Brexit negotiations at “a critical moment... fundamental questions about human rights and equality are at stake”.

“As activists and organisations working in the area of human rights and equality across the island, we call on all parties present to the negotiations to give written guarantees that the core principles of rights and equality set out in the Belfast/Good Friday Agreement of 1998 are respected.”

At a minimum, they say, there must be no diminution of existing human rights currently guaranteed to all people in Northern Ireland. Rights protected under EU law, must be retained.

They say: “The principle of equivalence in human rights and equality protections between both parts of the island as set out in the Good Friday/Belfast Agreement must continue to be respected.

“The ongoing and fundamental protections provided by the European Convention on Human Rights and the EU Charter of Fundamental Rights must be retained, together with the Human Rights Act, 1998.”

The signatories include: Liam Herrick executive director of the Irish Council for Civil Liberties; Tanya Ward, chief executive of the Children’s Rights; Colin Harvey, professor of human rights law at Queens University, Belfast; and Dr Anna Bryson, school of law at Queens’ University. They say the open Border, allowing for free movement of people North and South, must be maintained.

“Nothing in an agreement on future border arrangements should lead to a more restrictive system of immigration controls” either within Northern Ireland or on the island as a whole.

“We have raised these concerns with the Irish and British governments and the European Commission in a letter dated December 1st. We now urge all parties to the current negotiations to ensure that these principles are fully considered at all stages in the Brexit process and that these principles are reflected in any agreement which is reached between the United Kingdom and the EU.”