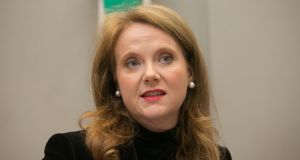 Senator Catherine Noone, chair of the Oireachtas Committee on the Eighth Amendment, asked members to “please be constructive” and not to seek to undermine the committee. File photograph: Gareth Chaney/Collins

Members of the Oireachtas committee on the Eighth Amendment have criticised colleagues who alleged its work displays bias or who have attacked the committee chair.

Earlier, Social Democrats TD Catherine Murphy said a lot of the contributions to the committee had been factual rather than biased, and the claim that the committee was operating in a biased manner was “utter nonsense”.

Allowing a narrative that the committee was operating in a biased manner should not be allowed as it was “a lie”, she said.

People Before Profit TD Brid Smith said there had been a deliberate attempt to create the fake perception that the chair was biased.

Sinn Féin’s Jonathan O’Brien said it was not the case that that there were only three anti-abortion members on the committee. “I myself do not consider myself to be pro-choice or pro-life.”

He said the conduct of Senator Rónán Mullen and Independent TD Mattie McGrath had been “disgraceful”.

Senator Catherine Noone asked members to “please be constructive” and not to seek to undermine the committee. She said she did not take the criticism directed against her personally.

In response, Senator Mullan said he had tried to avoid criticism of the chair but her management of the committee had “failed to procure objectivity”.

Mr McGrath said there had been a “stitch-up” for which the members were responsible. The committee’s work was unbalanced and there had been an “appallingly skewed line of speakers” before the committee, which had “already voted for abortion”, he claimed.

The committee hearings had been “a charade from the start”, the Tipperary TD said.

Meanwhile, Dr Patricia Lohr, medical director of the British Pregnancy Advisory Service (Bpas), told the committee Ireland was “fortunate” that women can go to the UK to avail of abortion services, as women in other countries with restrictive abortion regimes resort to unsafe measures which lead to high maternal fatality rates.

There was no evidence that the decriminalisation of abortion led to it becoming more widespread or more available, she said. Keeping abortion outside the criminal law meant lawful abortion care could be provided in accordance with the highest clinical standards, she said.

Asked by Fine Gael TD Peter Fitzpatrick about “gender abortion”, Dr Lohr said it was absolutely her view that it was for the woman to decide whether she was ready to parent. She could not imagine “compelling” a woman to continue with a pregnancy for which she was “unprepared”. Mr Fitzpatrick said that in his view, Bpas was a “horrifying” charity.

In response to a question from Senator Mullen, Dr Lohr said she had performed hundreds of abortions, “thousands maybe, I don’t keep track.”

Liz McDermott, a member of the One Day More group, which provides support to parents who have received “poor prenatal diagnoses” for their babies, said it was very disappointing that for the past number of years “the only focus of political effort has been towards introducing abortion”.

She said that in 2002, she was told the child she was carrying had shortened limbs. She said a doctor attending her commented: “He’ll never do anything but lie on a bed. I am obliged to tell you that if you want to travel to England it won’t be a problem.”

Her son John was born in 2003 and the experience of having him had been “hugely positive” for her and her family. “It’s a mistake to try and plan these things out because we risk painting a bleaker picture than actually happens”.

Holding up a copy of a poem written about John by his teacher, she said her son’s life “was not mine to do anything with. I think a lot of people in this country can’t get past that fact.”