O’Devaney Gardens regeneration to get under way 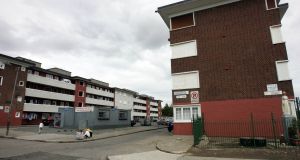 At nearly six hectares, and close the Phoenix Park, Heuston Station and the city centre, O’Devaney Gardens is seen as a prime site for housing development. Photograph: Eric Luke

The long-awaited regeneration of O’Devaney Gardens, one of Dublin’s most dilapidated flat complexes, is coming to fruition finally, with builders to be sought by Dublin City Council next month.

The 1950s flat complex, close to the Phoenix Park in Dublin 7, was to have been redeveloped under a public-private partnership (PPP) between the council and developer Bernard McNamara but after several delays the deal collapsed in mid-2008.

Most of the estate has been demolished, but a small number of flats remain in a rubbish-strewn wasteland. On a recent visit to the site, the executive manager of the council’s housing department, Tony Flynn, said he was “absolutely astounded by the cut of the place. I was shocked to be perfectly honest”.

Two years ago the council announced O’Devaney Gardens would be included in its vacant lands initiative under which it hopes to attract housing providers to build a mix of social, affordable rental and starter homes on 30 hectares of vacant land in the city.

The council also plans to develop sites it owns at Oscar Traynor Road in Coolock and St Michael’s Estate in Inchicore as part of the vacant lands initiative.

In total, 584 homes are planned for O’Devaney Gardens, 101 of which will be houses, with apartments in blocks of four to five storeys. Another 30 social homes will be located on a neighbouring site on Infirmary Road.

Since 2011 the council has had permission from An Bord Pleanála for 110 homes at the estate, 56 of which will be social housing. Last December former minister for housing Simon Coveney approved €17.9 million in funding for the construction of the 56 homes.

End of the year

Separately, the council will seek tenders for the remaining 528 homes this month but, because of the scale of this development, it does not expect to sign a contract for the scheme until next January.

At nearly six hectares, and close the Phoenix Park, Heuston Station and the city centre, O’Devaney Gardens is seen as a prime site for housing development.

Apartments will be available to rent at below market prices. However, the Government has yet to set the eligibility criteria for this scheme.