‘Hungry tree’ is slowly eating a cast-iron bench in Dublin 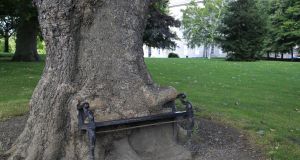 The ‘hungry tree’ in the grounds of Kings Inns. The 80-year-old tree has been gradually enveloping an iron bench . Photograph: Nick Bradshaw/The Irish Times

Dublin city councillors have called for the protection of a tree that is gradually swallowing a cast-iron bench in King’s Inns.

The “hungry tree” is a London Plane in the grounds of the law school on Constitution Hill that has grown to envelope much of the bench.

Councillors on Dublin city’s Central Area Committee recently passed a motion seeking for the tree and the bench to be protected.

Green Party councillor Ciarán Cuffe, who proposed the motion, called for a Tree Preservation Order for the plane tree and said the bench should be designated a protected structure under the planning Acts.

“They are a lovely part of the history of the north inner city,” he said. “A bit like the Blessington Basin, it is a hidden gem. I love it and I’d hate to lose it.”

A photograph of the tree features on the cover of Secret Dublin – an unusual guide. Another photograph can be seen in artist Robert Ballagh’s 1981 book Dublin – although the tree has expanded significantly since then and now covers more of the bench.

The plane tree is estimated to be about 80 years old and Mr Cuffe considers it one of the capital’s heritage trees.

“They have witnessed history and they are all the more precious for their age,” he said.

Is the bench endangered?

When contacted about the councillors’ decision, Dublin City Council said existing measures protecting King’s Inns and its grounds provide adequate safeguards for the tree and bench.

“As a fixture within the curtilage of a number of protected structures, the park bench, which has been partly enveloped by the London plane to which it abuts (and indeed now forms part of) is considered to be adequately covered and protected.

“If it were to be added to the RPS and to be a protected structure in its own right, the question arises: is the bench being endangered by the tree?”

The London plane is a hybrid that came into existence in the 17th century and was widely planted in Dublin during the 19th century. It is an ideal urban tree, being very tolerant of pollution and compacted soil.