The Question: Why is Dublin still a dirty ol’ town?

The capital remains one of the grimiest, most unkempt cities in Europe 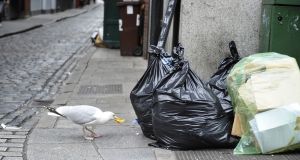 This week, Dublin businesses voted to retain the Business Improvement District (BID) group, which is known as Dublin Town and promotes and assists business in the capital, for another five-year term.

The build-up to the vote was quite acrimonious, and the group’s efforts to help clean the capital became a major point of contention. Trade unions Siptu and Impact weighed in to say that the city’s waste-management services can be provided by Dublin City Council staff, with no need for Dublin Town’s additional cleaning services.

Whatever about the merits or otherwise of Dublin Town’s larger efforts on behalf of the capital’s business community, the notion that Dublin City Council can clean the city on its own sounds outlandish to most residents, because even their combined efforts appear ineffective.

While it may have grown up in many respects over the past few decades, Dublin finds it impossible to shake off its Dirty ‘Ol Town moniker, and it remains one of the grimiest, most unkempt cities in Europe.

There is a dearth of bins in the city centre, and they are usually full to overflowing, with the predictable result that the streets are littered. Beyond the cigarette butts and rubbish, the footpaths are persistently stained with grime and chewing gum, as if we prefer to rely on rainfall to wash the streets clean. Furthermore, the paving is ad-hoc and uneven, admittedly not helped by the interminable Luas Cross City works that have disrupted the city centre for the past few years.

Cleaning the streets is not merely a question of resources but priorities – and it is more than just a priority for affluent cities such as famously immaculate Stockholm or Vienna. For instance, Spain was hit even harder than us by the financial crisis, and yet their municipalities have maintained a dedication to keeping their streets pristine. Barcelona used to be rather shabby and slovenly, but is now gleaming.

Ultimately, the state of our streets reflects a lack of a sense of ownership over the public space – we don’t feel responsible for the city in the way residents of other cities often do. But in the meantime, prioritising proper cleaning of the city, whichever group carries it out, is an important step.

Sean Moncrieff: The thing about freedom is that it isn’t free
3

Róisín Ingle: Our personalities emerged in lockdown. Which one of these were you?
10