Number of homeless could reach 10,000 by next year–Simon Community 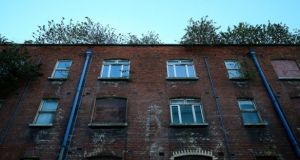 The number of homeless people in Ireland could reach 10,000 by the middle of next year if the current rate continues, the Simon Community has warned.

Spokeswoman for the homeless charity, Niamh Randall, said the homeless crisis “has been ongoing for two to three years. We’ve been warning that the crisis was waiting to happen.

“Everything is happening at a slow pace. Rapid build homes are taking 18 months, that’s just not rapid,” she said.

The Government is under renewed pressure over homelessness and the housing crisis after figures published this month revealed 7,941 homeless people - 5,046 adults and 2,895 children - were in emergency accommodation in June, a 30 per cent increase on the same time last year.

On Monday morning the Minister for Housing Eoghan Murphy said that the Government has a real homeless crisis and is seeking measures to get a “proper handle on it”.

Speaking following the news that the new strategy on vacant homes is due to be announced by next month, Mr Murphy said, “We have a real crisis. We are working hard to find solutions. We are looking for new measures so we can get a proper handle on it. The figures are going the wrong way. . . We have to look at the evidence to see what we can do to solve this problem.”

Mr Murphy said the main issue is supply and that it is not enough to just build new homes, but that strategies were needed to make vacant properties available.

Ms Randall welcomed the acknowledgement by Mr Murphy that the homeless and housing situation is now a crisis.

She told RTÉ’s Today with Sean O’Rourke show that the Minister’s plans for vacant homes were long overdue but were not enough.

“Any plan needs to be ambitious, we can’t wait any longer. We’ve been waiting too long, action has been too slow.”

Ms Randall said there is an affordable housing supply issue and that the Government needs to do more to ensure a greater supply of affordable housing as the private rental sector, with its insecurity of tenure, is not the solution.

The vacant housing strategy is expected to contain a number of incentives to encourage people to develop vacant units, as well as measures that will penalise those who do not. The Attorney General has been asked to examine if new powers of compulsory purchase are needed to help tackle the housing crisis.Séamus Woulfe is understood to be examining issues around the level of compensation that would be paid in cases of a compulsory purchase order (CPO), as well as the length of time it would take to implement such an order.

A vacant homes levy is also under consideration, and is expected to be included in Minister for Finance Paschal Donohoe’s October budget.

It is estimated there are 180,000 vacant homes in Ireland.

Mr Murphy said it is important to look at new measures such as “above shop living” and noted there is a need to speed up the process by which property is changed from commercial use to residential.

He said that ideally homes belonging to elderly people availing of the Fair Deal Scheme should be leased out.

Speaking on RTÉ’s Morning Ireland, the Minister defended the actions taken to date by his Government to tackle homelessness. “It would be worse if we hadn’t done what we did.”

He acknowledged that the Repair and Lease scheme had not worked, but maintained that there had been some success with the Buy and Renew scheme.

The head of the Housing Agency welcomed the Government’s plan to get vacant homes back into use.

The Government agency’s chief executive John O’Connor said there are two parts to the vacant homes plan; the first is to identify where vacant homes are, and then to support the home owner to get them back into use.

Speaking on RTÉ’s Morning Ireland, Mr O’Connor called on members of the public to report any vacant homes they are aware of to www.vacanthomes.ie.

Mr O’Connor said that last year 20,000 homes from unfinished estates had been completed and made available, with 5,000 to 6,000 of these in the Dublin area.

A further 2,000 homes nationwide were also purchased by the Housing Agency from Nama.

So far in 2017, the Government agency, which works with and supports local authorities, approved housing bodies, and Mr Murphy’s department in the delivery of housing, has completed deals on 400 homes.

Mr O’Connor said that the agency did not like to buy property on the open housing market as they did not want to compete with people trying to purchase homes.

He said it was important to implement the Rebuilding Ireland plan, and that while its targets were achievable, they would take time.