Brexit ‘may lead to later abortions for Irish women’ 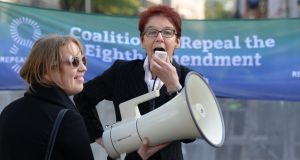 Pro-choice campaigners have raised concerns about the potential impact of Brexit on women travelling from Ireland to Britain for abortions.

Ailbhe Smyth, spokeswoman for the Coalition to Repeal the Eighth Amendment, said she was worried about restrictions on travel or access to services that might result from the United Kingdom’s decision to leave the European Union.

“My gut is telling me this could be problematic. If there is a limitation on freedom of movement, if the Common Travel Area for us is affected, then there will definitely be problems for women,” she said.

“If whatever deal is done leaves the Common Travel Area intact, I can’t see a huge change. But if the UK decides limitations on the kinds of services people from other jurisdictions can access, then there are so many questions up in the air.”

Women travelling from Ireland currently tend to have abortions at a later stage than those living in the UK, and Ms Smyth said Brexit could create additional delays.

According to the Irish Family Planning Association, 69 per cent of women having abortions who record home addresses in the State are between three and nine weeks pregnant. The equivalent figure for women living in England and Wales is 81 per cent.

Ms Smyth said the greatest impact would be on “vulnerable” women, including those who were very young, on low incomes or disabled. Some women did not have passports, she added.

She also stressed the potential impact on migrant women who required visas to travel. “They would definitely be affected by anything that even looks like toughening up entry requirements into the UK. There could be real practical difficulties and the psychological impact is potentially huge.”

‘Looking for an angle’

Pro Life Campaign spokeswoman Cora Sherlock said some women would continue to travel, whether Brexit happened or not.

“The pro-choice side looks for an angle in everything to push for repeal of the eighth amendment,” she said. “This is just the latest one. What pro-choice campaigners never admit to, though, are all the women who travel to England for abortion and end up regretting the decision.

“With or without Brexit, sadly some women will continue to travel. We should be working together to put more supports in place to reduce the likelihood that women feel they have no other option. That’s where the focus should be.”

Ms Sherlock said most of the current discussion was about making abortion more widely available, with almost no mention of what abortion involved.

“I hope more balance will be introduced into the debate in the coming months and that positive alternatives to abortion will be highlighted more in place of the relentless push for abortion.”

Concern about Brexit was also expressed by one of the leading providers of abortions for women travelling from Ireland to Britain, the British Pregnancy Advisory Service.

“We are concerned about the impact Brexit may have on travel between Ireland and England, and what the implications will be for women travelling to access care,” a spokeswoman said.

“For some women, having to obtain a passport would be an insurmountable barrier, if that became a necessity. Our hope is, of course, that by the time any such restrictions were introduced, Ireland would have repealed the eighth amendment and have a framework in place that provided women with legal, accessible abortion services at home.”

With a referendum on the eighth amendment scheduled for 2018, Taoiseach Leo Varadkar has said the article that enshrined the equal right to life of the mother and the unborn into the Constitution in 1983 should be replaced with something else because it is too restrictive.

A cross-party Oireachtas committee on the eighth amendment has a deadline of three months from its first public meeting in September to make a recommendation on a referendum wording to Government after considering the work of the Citizens’ Assembly.

Meanwhile, a fresh inquiry focusing on issues relating to women travelling from Ireland to Britain to seek terminations will be undertaken by a group of politicians who are members of the British-Irish Parliamentary Assembly.

In June the UK government announced women from Northern Ireland would be given access to terminations by the NHS in England, following a proposal by Labour MP Stella Creasy.