Pope orders halt to euthanasia at Catholic hospitals in Belgium 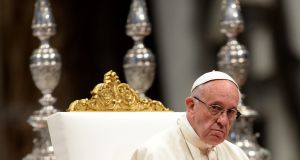 Pope Francis has given the Brothers of Charity in Belgium until the end of August to stop euthanasia at all of its 15 centres in that country. File image: Filippo Monteforte/AFP/Getty Images

Pope Francis has ordered the Brothers of Charity religious congregation in Belgium to end the practice of offering euthanasia in its psychiatric hospitals.

Euthanasia is legal in Belgium and last May the Brothers of Charity lay board of directors in that country announced they would allow doctors perform euthanasia on psychiatric patients in its centres if there were “no reasonable treatment alternatives”. They said they respected “the freedom of doctors to carry out euthanasia or not,” noting that this was “guaranteed by law”.

Belgium, along with the Netherlands, Luxembourg and Colombia, is one of four countries in the world where euthanasia is legal. To qualify, people must be in a state of “unbearable suffering” and at least three doctors, including one psychiatrist, must be consulted.

Assisted suicide is legal in Switzerland, Germany, Japan, Canada, and in the US states of Washington, Oregon, Colorado, Vermont, Montana, Washington DC, and California.

The Vatican has confirmed that Pope Francis gave his personal approval to a letter sent at the beginning of this month which gives the Brothers of Charity in Belgium until the end of August to stop the practice at all of its 15 centres in that country.

It calls on the Brothers to sign a joint letter to their Superior General declaring they “fully support the vision of the magisterium of the Catholic Church, which has always confirmed that human life must be respected and protected in absolute terms, from the moment of conception till its natural end.”

It points out that Brothers in Belgium who refused to sign the joint letter renouncing the practice of euthanasia would face sanction under canon law and could expect to face excommunication.

In a statement the General Superior of the Brothers of Charity René Stockman, a Belgian, said in Rome that “the central point and the foundation within Christian ethics is that life is absolute, which cannot be touched”.

He pointed out that this was the very first time a Christian organisation had stated “euthanasia is an ordinary medical practice that falls under the physician’s therapeutic freedom” he said. It was “disloyal, outrageous and unacceptable”.

Mattias De Vriendt, a spokesman for the Brothers of Charity in Belgium, said they had received the Vatican’s letters and had yet to respond. He also confirmed their hospitals had received requests from patients seeking euthanasia recently but could not say whether any such procedures had been performed.

Covid-19: Garda presence in Dublin to be significantly increased 21:32
President Higgins says British must face up to their history of reprisals 21:30
Rest of country can ‘transit’ through Dublin for overseas travel 21:14
Raab’s US visit amplifies Democratic support for Irish 21:06
Record number of Roseate Tern seabirds breed on Wexford island 20:59