Irish-language choir stages protest after being cut out of Masses

‘After 50 years that was that. No consultation, no words of regret, no thanks’ – Dublin choir 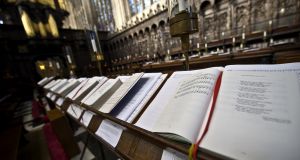 “We are not natural protesters. We are a church choir,” said the director of Pobal Aifreann Dhún Laoghaire. Photograph: iStock

A lay Irish-language Mass group sang hymns outside a Catholic diocesan event in Dublin on Thursday evening in protest at what they claim is their exclusion from their local parish for the past 18 months.

“We are not natural protesters. We are a church choir. We have spent a year and a half writing letters and seeking meetings. The parish priest has refused to meet us. We feel let down and hurt by the way we have been treated by the parish priest and by the archdiocese,” she said.

For 50 years, Pobal Aifreann Dhún Laoghaire organised an Irish-language Mass in St Michael’s parish church there. They also organised Mass readings and Prayers of the Faithful, as well as supporting priests who needed help with Irish.

However, in the summer of 2017, Fr Kenny “suddenly ended the Irish-language Mass. And after 50 years that was that. No consultation, no words of regret, no thanks or acknowledgment for all the years of loyal service to the parish,” the group said in a statement.

It said it had also written many letters to Archbishop Diarmuid Martin “to no avail”.

Ms Uí Argáin said “the publication of Canaimis – Ceol don Aifreann was the final straw”. It was just “ window dressing to show that the official church is supportive of the Mass in Irish, when the reality on the ground in our experience is the opposite”, she said.

Fr Kenny has made no comment on the matter but a spokeswoman for Dublin’s archdiocese said its Coiste Tréadach, which advises on pastoral ministry to Irish speakers, had met members of Pobal Aifrinn Dhún Laoghaire “on a number of occasions and remains hopeful a resolution can be found in due course”.