Affordable purchase scheme to be in place in weeks, Housing Agency says 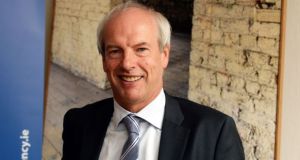 Chief executive of the Housing Agency John O’Connor told the committee the regulations ‘to give full effect to the legislation will be produced in the next number of weeks’. File photograph: Cyril Byrne

An affordable purchase scheme, to provide homes for low- and middle-income buyers, is expected to be in place within weeks, an Oireachtas housing committee has been heard.

Minister for Housing Eoghan Murphy last June signed the scheme into law, but local authorities have yet to be issued with regulations to allow them to run affordable purchase schemes in their areas.

The homes, which will be built on local authority lands, will be aimed at workers who cannot secure mortgages to buy on the open market, but do not qualify for social housing. Single applicants must earn less than €50,000, while the limit for a couple will be €75,000.

Once the homes are built, they will be sold to qualifying buyers at a discount of up to 40 per cent on market rates.

Chief executive of the Housing Agency John O’Connor told the committee the regulations “to give full effect to the legislation will be produced in the next number of weeks” and will be issued to local authorities.

The regulations will instruct city and county councils how to operate the scheme, including how to determine the purchase price of homes, how they will engage contractors, what level of discount will be available to buyers, and what eligibility criteria - other than the income limits – buyers will have to satisfy.

O Cualann Co Housing Alliance, a co-op which runs its own affordable purchase scheme, the only one currently available, told the committee that the maximum income limit of €75,000, in the upcoming national scheme, is too low for Dublin buyers.

The housing co-op has built 49 houses in Ballymun with a three-bed house costing an average of €170,000, and is to start work on a second Ballymun site in two weeks time.

O Cualann allows its Ballymun buyers to earn up to €79,000, its chief executive Hugh Brennan said.

“Our target market for owner occupiers and affordable renters is that segment of society who earn more than is required to qualify for social housing, €35,000 - €42,000 and up to €79,000 maximum household income.”

However he said if affordable housing was built in areas such as Dun Laoghaire, “that threshold might need to be €80,000 or €85,000”. Only seven per cent of house sales in the private market were to buyers under the €80,000 mark, he said.

These higher income earners could be permitted to buy affordable housing, but would get less of a subsidy from the State than a buyer who had an income of €42,000, Mr Brennan said.

The Economic and Social Research Institute (ESRI) told the housing committee “unaffordability” was a consistent feature of the Irish housing market and not down to cyclical economic factors.

Senior research Dr Conor O’Toole said, on average, households were spending approximately 20 per cent of their income on housing costs, but for the poorest 25 per cent of the population that figure was nearly 40 per cent.

“Households in the private rental sector, those living in urban centres, particularly Dublin, and those on low incomes face the greatest challenges,” he said.

Low income renters in particular, faced high housing costs, and this not a new issue but a long-term “structural” problem, he said.

“While rental price inflation has been high in the very recent period, the persistent high rent to income ratios suggests affordability challenges are structural rather than cyclical in nature - i.e. have persisted over time.”