Guests on new Traveller-led channel to include Peter Casey 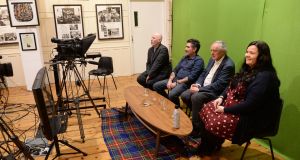 Among the guests a new Traveller-led video channel hopes to have on in coming weeks is former presidential candidate Peter Casey.

TraVision founder Bernard Sweeney says the channel, which goes live on YouTube on Sunday, will challenge and explore attitudes by settled people and also Travellers towards the Traveller community.

Mr Casey ran in the presidential election last year and saw his projected share of the vote increase from about 2 per cent to more than 20 per cent after controversial remarks about Traveller culture.

The fallout from the Carrickmines tragedy, in which 10 people died in a fire at a temporary halting site in Carrickmines, Co Dublin, in October 2015, was discussed in the context of widespread anti-Traveller sentiment.

Browne said racism against Travellers was “almost part of the DNA of the settled community” and described his encounter with a taxi driver en route to the recording.

“He spoke from the perspective of a large number of people, implying every member of the Traveller community was guilty of anti-social behaviour, couldn’t be bothered finding jobs, that they were living off the rest of society.

“There is a problem and the Travelling community and society as a whole have got to consider how are we going to deal with this prejudice. It is the source of a lot of the problems faced by the community.”

Ms Lawrence compared the public reaction to the deaths of four young men in a car crash on Donegal at the weekend with that to the Carrickmines tragedy.

“But free speech is not an absolute right. It does not give you the right to incite hatred or violence. We don’t have strong hate-speech legislation and that is a big gap.”

Browne said the fact that anti-Traveller racism was not challenged when it happened indicated its widespread acceptability.

He cited a question asked in one of the televised presidential campaign debates in which candidates were asked if they would be happy having a Traveller family move in next to them.

“In my opinion this was a racist question,” said Browne. “Had [they been] asked: ‘Would you be happy if a black family moved in next door?’, there would have been outrage. In this instance, there was not a single commentary that I came across.

“A whole community can be demeaned by a question on a presidential debate and nobody makes any protest, including from the Traveller community.”

Mr Sweeney, who hosted the discussion, said he hoped the channel would broadcast once a fortnight but this depended on finances.

He stressed TraVision was “totally independent” and not aligned to, or funded by, any NGO or organisation. A GoFundMe page for TraVision has been set up.

He said the channel would discuss current affairs, music, health and sport and would not confine itself to Traveller issues or guests.