‘Some picked out the vegetables, saying they had only ever seen them in pictures’ 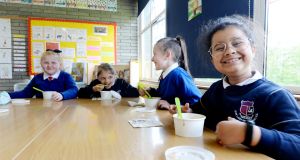 A new national hot school meals programme “has the potential to be hugely transformative” for children, according to the principal of the first school in the scheme.

Tonya Hanley, principal of Our Lady of Lourdes National School in Inchicore, Dublin, says that while the initiative has not been without its teething problems, it should be continued and rolled out nationally as soon as possible. It has been running on a trial basis at her school since January, prior to a national pilot project.

Minister for Social Protection Regina Doherty announced plans for a national hot school meal programme in Budget 2019, and hopes to offer it to all national schools from September 2020.

Her department is about to start offering invitations to 36-40 schools, benefiting about 7,200 children in the most deprived areas across the State, to take part in a year-long pilot scheme from September.

In Inchicore, 264 schoolchildren have been getting hot lunches since January 28th.

“It’s going really well, the children love it,” says Ms Hanley. “There is some real food poverty among our families, some are homeless and don’t have cooking facilities. So this might be the only hot meal the children get in a day.”

A budget of €2.90 per child’s meal is provided by the department and the school must source a provider compliant with the 2017 nutrition standards for school meals.

Our Lady of Lourdes NS has chosen Carambola to deliver the hot meals in compostible containers, to be eaten at the children and teachers’ desks. Among the meals, which are portion-sized to suit the children’s ages, are pasta Bolognese, fish fingers and mashed vegetables, and chicken curry, with vegetarian and vegan options.

“We were apprehensive there would be a lot more work for us in it, but there hasn’t been really. There has been a lot of tweaking with Carambola, getting the temperature, the seasoning right – that kind of thing,” says Ms Hanley.

“A very small number of the children had difficulties digesting the food at first. They just weren’t used to real meat, vegetables – [they had been] living on very processed diets.

“Some picked out the vegetables, saying they had only ever seen them in pictures. So they’re blended now. We’d hope, especially as the younger children get older, to introduce whole vegetables back into the meals. In the pasta there’s really good meat, carrots, onions and tomatoes.”

As well as ensuring the children get at least one hot, nutritious meal a day, the scheme has introduced new tastes to some children, while also sparking discussions about healthy eating. The school is also now offering healthy cooking classes to parents.

Among those enjoying penne pasta Bolognese on Tuesday are Julia Oles (9) and Lewis Hickey (9). Asked whether they prefer the hot lunches or the cold, they both say the hot, “because they make you nice and warm and they’re tastier”, says Julia.

Her favourite meal is chicken goujons and mash (on Thursdays), while Lewis prefers the chicken curry, “because they get the spices just right”.

He says he hadn’t tried shepherd’s pie before and “that’s really nice”.

Asked about the impact the hot meals are having, Ms Hanley says it is too early to say beyond that the children enjoy them.

“But I really do think, especially for the junior infants children, if they have them all the way up through to sixth class, they have the potential to be hugely transformative for children’s health, their wellbeing, their concentration and attendance in school, their education – their overall outcomes.”