Government reliance on private rental ‘not the way to go’

Ombudsman for Children says housing should be fundamental right in Constitution 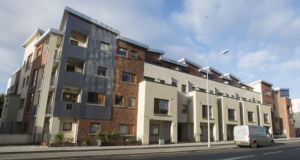 The Government is constantly “grappling” with homelessness, Ombudsman for Children Dr Niall Muldoon has said.

Dr Muldoon said the Government’s reliance on the private rental sector is “certainly not the way to go” and it should make housing a fundamental right in the Constitution.

Dr Muldoon was speaking at the publication of a report, No Place Like Home, from his office that heard the views and experiences of homeless children living in family hubs.

Family hubs are centres that accommodate homeless families, with on-site cooking and laundry facilities, on a temporary basis. The first hub opened in Dublin in March 2017 as an alternative to hotels. There are now 26 family hubs, with 22 of those in Dublin.

“Homelessness is something they’re [the Government] grappling with all the time. I think trying to put up bricks and mortar seems to be a slow task, but the reliance on renting is certainly not the way to go,” Dr Muldoon said.

“The UN special rapporteur on housing [Leilani Farha] criticised them last month, one of only six countries in the world they criticised for over-reliance on institutional investment and turning rental properties into a financial commodity as oppose to the social commodity that housing should be,” he said.

“The very nature of having 30 per cent of our rental market owned by big institutions who are beholding to shareholders and profits shows that we’ve made a policy decision to allow that to happen.”

“They [family hubs] came into being through ad hoc ways in 2017 so they haven’t really been highlighted or evaluated.

“I think . . . part of our rationale for going to do this is that we wanted to hear what it was like to live in them and I think they’ve developed well . . . but we now need to look two years on and maybe between €60million and €100m due to be spent on it in the last three years, we’ve got to look and say what are we getting for this and what’s the future.

“In the next three to five years will there still be family hubs, are they working?”

Children aged five to 17 and the parents of under-fives living in hubs in Dublin, Cork and Limerick were consulted for the report.

Parents of children under five identified lack of space, privacy, excessive noise and tension between residents as common themes. Parents and children said they struggled with not being allowed to have visitors, while shame and embarrassment was frequently expressed by children.

Children aged between five and 12 described how they have tried to adapt to the lack of space and privacy.

“Sometimes I have to read in the toilet if my sister wants to go to sleep. I love reading, my favourite book is Harry Potter, ” said Lena (9).