Archbishop calls for some churches to be allowed hold greater numbers 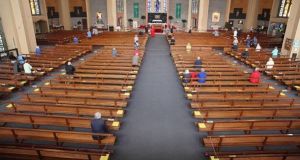 Large spaces between members of the congregation at the 10am Mass on Thursday at the Church of Our Lady of Consolation in Donnycarney, Dublin. Photograph: John McElroy

Churches in the Republic should be allowed follow similar rules to those in Northern Ireland when it comes to attendance at Masses, Catholic Archbishop of Dublin Diarmuid Martin has said.

“Churches across the Republic of Ireland are still awaiting information on the announced protocol between the Government and religious bodies about the numbers that may attend religious services, especially in large buildings,” he said on Thursday.

He pointed out that “the new Northern Ireland advice is that the number should be calculated on the basic of proportionality to the size of each church whereas in the Republic of Ireland a blanket cap of 50 people is still in place”.

This limit in the Republic, which has been applied in churches since last Monday, had been “working, albeit with some difficulty”, he said, but “priests around the country” were concerned about what might happen next Sunday.

The 50-person limit for each Mass in the Republic, he said, “would mean turning many people away or having them remain outside where social distancing is more problematic”.

He drew attention to a photograph from Thursday’s 10am Mass at the large Church of Our Lady of Consolation in Dublin’s Donnycarney to illustrate the point on available space in larger churches. It shows great spaces between members of the congregation.

It showed “how the Church has been kitted out with clear indications of social distancing with stewards in place to monitor adherence to the norms. It shows an ambience far different to what is authorised in other sectors,” he said.

Last weekend, in a letter to the priests and parishes of the Dublin archdiocese , Archbishop Martin said that following an online meeting with the secretary general to the Government he had been informed that “the Chief Medical Officer (CMO) and the public health authorities were against making any exception for churches from the maximum number of 50 at indoor gatherings”.

Their “specific concerns” included “the problem of access and exit from churches and especially in car parks; they felt that the larger of any gathering, the greater the risk; they referred to examples from overseas where outbreaks occurred around church gatherings; they were concerned about the possibility of community singing fostering the spread of droplets”.

He said the outgoing cabinet “was anxious to widen the possibilities for Churches but was not prepared simply to lay aside the view of the CMO”.