Missing Persons’ Day: ‘We are in limbo, it is like we are stuck’ 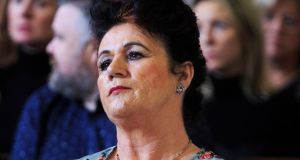 A school choir sang a haunting version of Bring Him Home as a giant screen in the great hall of Dublin’s King’s Inns started displaying pictures of just some of the almost 900 Irish people who have been missing for months, years and sometimes decades.

When the music stopped the pictures kept coming, photographs of men and women – mostly young – frozen in time and lost without a trace, a steady stream of heartache, confusion and devastation.

Hundreds of people including many family members and friends of the missing had come together to mark the seventh Missing Persons’ Day. While the gathering heard from the Garda Commissioner Drew Harris and Minister of State at the Department of Justice David Stanton, the most powerful words came from those who had lost loved ones and were still searching.

Jo Jo Dullard was last seen in Moone in Co Kildare on the night of November 9th, 1995. She had been in Dublin that evening but missed the last bus home to Callan so instead took a different bus and then hitched a lift to Naas and another to Moone.

She rang a friend from a phone box in Moone and the call was cut short when she said a car had pulled up. She was never heard from again.

Her sister Kathleen Bergin spoke of the “devastating effect” the disappearance had on her family. “Time moves on but the pain never eases,” she said. “It is the cruellest form of torture that can ever be inflicted”.

MC Barry Cummins from RTÉ pointed to some breakthroughs over the course of the event, many of which were aided by improved DNA matching techniques but he also said the problem has worsened.

He said that on Missing Persons’ Day last year there were 870 people who were considered long term missing and that number had grown to 890 this year.

Gave up on life

Lisa Dorrian from Bangor, Co Down, was last seen at a caravan park on February 28th, 2005. She disappeared after a party at the site in Ballyhalbert. Less than two weeks later the PSNI told her family they believed she had been murdered. Her body has never been found.

William Maughan (35) and Anastasija (Anna) Varslavane (21) were last seen in Gormanston, Co Meath, on Sunday April 14th, 2015. The couple were expecting a child.

William’s mother Nell said that just days before they went missing he had called her and said he wanted to move back to Tallaght.

She arranged to help him with the move and on the day they went missing he called her to see if she was on the way. When the call was coming to an end he said “’Mam, I love you.’ I will always treasure those words,” she said

She told the gathering that “a heavy burden is weighing us down, we are in limbo, it is like we are stuck since William went missing. Unless you’ve experienced this you cannot understand it,” she said

She said the event was “the one time of the year that we get down talk to people who are in the same boat as us “ and she appealed those responsible for the couple’s deaths to allow the family to give them “the Christian burial that they deserve”.

Mr Harris said it was a “a very important day” and said it would be used by the force to get feedback on how it is doing in dealing with these cases. He added that it was “a day of sadness and the day of hope against hope.”