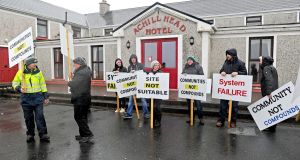 A silent protest has continued at the Achill Head Hotel in Pollagh, Co Mayo in recent days. Protesting residents say the hotel is not suitable to house asylum seekers. Photograph: Conor McKeown

Minister for Justice Charlie Flanagan has called for an end to recent protests on Achill Island, Co Mayo, saying they are not “representative” of the people of Mayo.

Mr Flanagan’s comments come after several days of protests on Achill over plans to house 13 female asylum seekers at the Achill Head Hotel in the village of Pollagh. The Department of Justice has postponed the arrival of the women due to the protests.

The Minister told RTÉ Radio’s News at One that it was unfortunate that it appeared the “alt-right” was involved in the protests.

He said that it was important that dialogue was held between department officials and local groups. The Achill Head Hotel would not become a direct provision centre, he said, and it would only provide temporary accommodation for vulnerable women and children.

They would be given the basic essentials of bed and board, he said. Not only was this a legal obligation for the Government, but it was also a moral obligation, said Mr Flanagan.

“I am appealing for the lifting of the siege [in Achill].”

Protesting residents in Achill say they are not opposed to asylum seekers living in their community but are opposed to the lack of consultation from the Department of Justice and have safety concerns about the proposed site.

Mr Flanagan also said that it was “unfortunate” that the alt-right had an “insidious” anti-immigration agenda. He said that when he left his office at the Department of Justice on Thursday evening, there were protesters bearing placards about the “inhumanity” of direct provision.

He said he and Minister of State for Justice David Stanton have been consulting to consider a process which would allow the Government “to beef up” hate speech legislation.

Responding to a call by the Fianna Fáil justice spokesman, Jim O’Callaghan, for the State to construct its own facilities for asylum seekers, Mr Flanagan said that such facilities could not be constructed overnight and at present the Government did not have many options.

It was important for communities to give a “céad míle fáilte” to “these vulnerable people” in circumstances similar to those of the hundreds of thousands of Irish who emigrated to the USA and elsewhere over the years, he added.

“These insidious attacks on social media have to stop.”