‘It is not a crime’: The women behind North’s abortion law change

Pro-choice campaigners say there is much yet to do, but for now they are celebrating 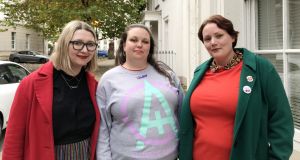 Two years ago, a Belfast woman told Danielle Roberts what she had told no one else – that she had had an abortion.

“She closed the kitchen door in her own house before she would say to me that she had taken abortion pills,” says Roberts.

“On Monday night she sent me a text message – it was a heart.”

For Roberts and her fellow volunteers at Alliance for Choice in Belfast, it is the stories of women like these that persuaded them to take action. For Emma Gallen – who has spent 100 Saturdays organising and manning an information stall in the city centre – it was the Belfast student who received a suspended sentence in 2016 for inducing a miscarriage by taking pills she had bought online.

“She was 21 at the time and she got a criminal conviction for something that in any other part of the UK wouldn’t have been a crime,” says Gallen. “I thought it was sickening and disgusting. She was saving up to get an abortion in England and just didn’t have the money. It could have been anyone.”

“Now there is no crime to report,” says another volunteer, Elaine Crory. “That’s the single biggest thing for me. It is not a crime.”

At midnight on Monday abortion was decriminalised in Northern Ireland. Previously the North had strict anti-abortion laws. Abortion was illegal in the majority of cases, including fatal foetal abnormality, incest and rape; in 2017-2018 more than 1,000 women from Northern Ireland travelled to England and Wales for abortions.

Women who seek access to abortion in Northern Ireland will no longer be prosecuted, and investigations of illegal abortions will no longer be pursued. Prosecutions currently under way will be halted; this week a Northern Irish woman who was being prosecuted for buying abortion pills online for her teenage daughter was formally acquitted after the change in the law.

A consultation is to begin shortly that will inform new legislation governing the provision of abortion services in the North. This is to be in place by the end of March next year.

Since Monday, butterflies have appeared around Belfast city centre, designed by artists from the faces of activists such as Roberts, Gallen and Crory to mark the change in the law.

For years Roberts was one of the escorts at the Marie Stopes Clinic in Belfast. The clinic opened in 2012 and closed in 2017. Every day, there were protesters outside. The escorts – all volunteers – accompanied women who requested them.

“We very rarely met people outside to bring them in, but they would then request us going out, because they had come through the protesters on the way in,” she explains.

Her voice quietens as she describes some of the women they escorted.

“Women who did [meet the strict medical criteria for abortion] were people whose lives or whose health – mental or physical – was at serious or permanent long-term risk.

“The people who had early medical abortions at Marie Stopes, some of them were in very difficult circumstances,” she says. “We’re talking about people who were not in a mental state to continue with their pregnancy potentially because of how they became pregnant or the way the relationship was.”

“There was one woman who had her contraceptive implant cut out of her arm . . . and she was having to go through protesters.”

Roberts was verbally assaulted; she witnessed others she was working with being threatened, and describes how one colleague was left with bruises after she was grabbed and held by the throat.

The change in the law, though the result of an amendment brought by a British MP in Westminster, was in a large part down to the actions of Alliance for Choice and others such as Amnesty International, who were instrumental in paving the way for the ruling, by the United Nations, that the North’s abortion laws were a violation of human rights, which in turn facilitated the change in the law.

Abortion has long been deeply controversial in Northern Ireland. On Monday anti-abortion protesters gathered outside the North’s Assembly building at Stormont as unionist politicians attempted, unsuccessfully, to block the change in the law; DUP leader Arlene Foster said on Monday that her party would “take every possible legal option open to us”, up to and including repeal, to try to prevent the legalisation of abortion.

Roberts, Gallen and Crory are unconcerned. “It’s done,” says one. They stress that they are not yet finished; there is much yet to do – not least in connection with the consultation – but for now, there are smiles, hugs, celebrations.

“When I had my first daughter in 2012,” says Crory, “I remember just looking at her and thinking I have so much to do, because I can’t leave her with the same stuff that we have to deal with.”

“That’s a huge weight off. This is for everybody, but it’s especially for them. I think it’s the biggest relief I’ve ever felt in my whole life.”

1 Irish tourists excluded from visiting Greece and Croatia
2 Taoiseach has confirmed schools will reopen at the end of August
3 Rise in pension age poses potential problem in coalition talks
4 Covid-19: Pupils may be kept apart in groups and pods when schools reopen
5 Derek Chauvin charged with murder in connection with death of George Floyd
Real news has value SUBSCRIBE