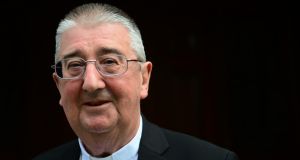 The Catholic Archbishop of Dublin Diarmuid Martin has expressed astonishment “at the content and tone of daily messages on social media by Catholic pundits on the left and the right that are anything but kindly.”

There were “those who spend all day attacking and responding and feeling that in this they are defending the integrity of Church teaching,” he said. The latter would “never be defended by nastiness and bitterness. Such negativity and polarisation reflects rather a pointless retreat into self-defined false certainties,” he said.

As Archbishop Martin remarked “it is a church which, to use a phrase of Msgr Ciaran O’Carroll (Rector of the Irish College in Rome), once Rector of this church, represents ‘a theological statement in stone, marble and paint’ of Newman’s vision of his mission and of his university.”

The church was “a forward-looking symbol of his great ambition of a university in which faith and reason would fruitfully interact” and “in a sense an integral chapter, written in stone and marble and paint, of Newman’s ‘Idea of University’,” the Archbishop said.

He remarked how “in recent days, people have been asking the question would Newman have been a Brexiteer or a Remainer. I have my own idea as to which. My question is however a different one. Where would Newman place himself in the situation of the church in today’s Ireland?”

Irish Catholicism, he said “is marked for many as a culture of religious certainties and for others one where each one determines his or her own beliefs. Newman would belong to neither. Conversion is always the roadway of a whole lifetime,” he said

“The church must reach out to those who belong to its fold but also to the many who are religiously estranged or non-affiliated, not confronting them with readymade answers, but attracting them into that search for the true light and accompanying them on that life-long journey towards discovering their true selves,” he said.