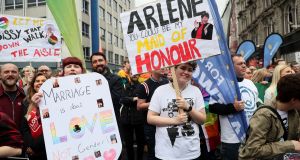 The recent dismissal of a Dublin-based Presbyterian Church elder is the latest example of a particularly hard line taken by the church against same-sex marriage in recent times.

Steven Smyrl, of Christ Church Sandymount, was forced from his role as a result of the findings of an internal church commission set up to investigate the 53-year-old genealogist’s relationship with his husband, Roy Stanley (60).

Smyrl was ordained an elder in 2007. He and Stanley, a librarian who attended the same church, have been together for 20 years and entered a civil partnership in 2011 before getting married last November.

Their marriage was widely known and accepted by the local congregation, and the church council in Sandymount has unanimously supported an appeal against the decision to dismiss Smyrl. However, members of the council did not wish to comment on the matter pending the outcome of their appeal.

Smyrl’s case is not the first example of the Presbyterian Church in Ireland taking a firm stance against same-sex marriage in recent years, which has provoked deep internal division.

The Church’s General Assembly in Belfast decided in June of last year that same-sex couples could no longer be full members of the church, nor could their children be baptised.

It decided to loosen ties with its mother church, the Church of Scotland, as the latter moved towards approving same-sex marriage. It also decided to no longer accept invitations to attend general assemblies of the Church of Scotland and the United Reformed Church, and to no longer issue invitations to those churches to attend its general assembly.

Rev Trevor Gribben, clerk of the Presbyterian General Assembly, said the separation “demonstrated that a majority of assembly members felt that both denominations have drifted far from biblical truth in relation to marriage, and were in fact ignoring the authority of scripture”.

The decisions last year followed a report by the Irish church’s doctrine committee, which concluded that “in the light of our understanding of scripture and the church’s understanding of a credible profession of faith, it is clear that same-sex couples are not eligible for communicant membership nor are they qualified to receive Baptism for their children”.

“We believe that their outward conduct and lifestyle is at variance with a life of obedience to Christ,” it said.

With a law permitting same-sex marriage set to come into force next year in Northern Ireland, where more than 90 per cent of the church’s 225,000-Irish based members live, further issues are likely to arise in future.

The Presbyterian Church says it “has a clear position on marriage and human relationships based on the teaching of the Bible” and taught that “homosexual activity is not consistent with Christian discipleship since it does not accord with the will of God expressed in his moral law”.

We do not agree with such a lifestyle. We believe it is contrary to the Bible’s teaching on marriage

The conclusions of last year’s report were not entirely unexpected. Former Alliance Party leader David Ford in 2013 stood down as an elder in his Donegore congregation in Antrim due to his, and his party’s, support for same-sex marriage.

In June 2015, a month after the marriage equality referendum was carried in the Republic, outgoing moderator Rev Dr Michael Barry addressed those “who accuse us as Presbyterians of bias and attack, and that is the LGBT community”.

“In recent campaigns, we have been accused of being homophobic. I can state categorically that we as a church are not homophobic. We do not agree with such a lifestyle. We believe it is contrary to the Bible’s teaching on marriage,” he said.

The church was “saddened by the referendum” but he argued that it “must be allowed to disagree without being smeared”.

“And if there are any who take the name of Presbyterian and who are carrying on a hate campaign against the LGBT community, then they must stop.”

Rev Christina Bradley, a minister in Portadown, Co Armagh, welcomed the referendum result as “inclusive and compassionate”. She was subject to an investigation by the church.

In findings that September, read in her presence at Armagh Road church in Portadown, it was stated she fully accepted church teaching “that marriage is to be between one man and one woman”, and had confirmed same-sex marriage was contrary to the will of God and that homosexual practice was sinful.

It had also accepted her welcoming of the referendum result was “open to misinterpretation”.

There have been other dissenters, too.

In a letter to The Irish Times in June of last year, following the church’s decision to ban gay couples as full members, Rev Katherine Meyer, minister at Christ Church Sandymount, from which Smyrl was dismissed, responded strongly.

This level of feeling is unprecedented in our pastoral experience

She described herself as “nearly speechless with dismay at the thought of how these decisions, from which I and many others formally dissented, will now be heard, used and wielded. Nearly speechless, but not quite.”

A month later a total of 232 Presbyterian ministers and elders acknowledged the “profound sense of hurt, dismay and anger” felt in the church following decisions at the general assembly on same-sex issues.

In a statement, entitled A Cry from the Heart, they said: “This level of feeling is unprecedented in our pastoral experience.”

They said they were “committed to doing all we can to ensure that the decisions which have prompted such a level of concern will be subject to the urgent attention they deserve, and for which many in the church are calling.”

The statement had little effect, it would appear.

It emerged in March that the Presbyterian Church in Ireland had dismissed a professor at its Union Theological College in Belfast for publicly disagreeing with the church’s outright opposition to same-sex relationships. Rev Prof Laurence Kirkpatrick had been teaching there for 22 years.

The college has been providing training for the Presbyterian ministry, as well as theology courses for students at Queen’s University Belfast. However, Queen’s decided last December not to admit any new undergraduate theology students to the college for the term that began last month.

Among the findings of a review it conducted were that “a single denomination providing all the undergraduate theology provision for a research-based university is highly problematic and not sustainable in today’s post-conflict Northern Ireland”.

However, the Presbyterian Church is not for turning, as illustrated by Smyrl’s dismissal earlier this month.

This one will run and run.