Demonstrations took place at the hotel on Thursday, Friday and Saturday of last week 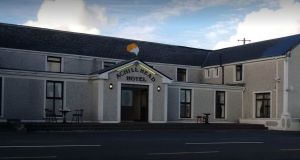 News of plans to use the Achill Head Hotel as a direct provision centre emerged on Wednesday of last week and a heated public meeting took place on the island that night.

A plan to house asylum seekers at a hotel on Achill Island has been postponed due to ongoing protests at the hotel.

Some 13 female asylum seekers were due to arrive at the Achill Head Hotel on Friday but the Department of Justice has now confirmed it had postponed their arrival once more.

In a statement it said: “The Department of Justice and Equality had hoped to transfer 13 vulnerable women to the Achill Head Hotel. The hotel was to provide emergency short-term accommodation to women who have come to Ireland seeking international protection. They were to be in Achill for a maximum stay of three months. However, an ongoing protest remains in place outside the hotel, so the Department has regrettably decided that, at the moment, to ask the women to move there would not be in their best interests, as they may be vulnerable while awaiting decisions on their protection applications”.

It added that officials from the Department have been engaging with public representatives from the area since last week, and on Wednesday night, they met with elected and community representatives in Achill. “They discussed community concerns and the engagement has continued today. The Department is disappointed at the continuing protest but it will continue to engage, in an effort to resolve the situation,” it said.

Protests at the Achill hotel continued on Thursday night.

News of plans to use of the Achill Head Hotel as an emergency direct provision centre emerged on Wednesday of last week and a heated public meeting took place on the island that night.

My heart is so heavy tonight thinking of the 13 women who won’t be moving to Achill tomorrow.

They know from the news that they won’t be transferred tomorrow because of protests against the accommodation.

The department has handled this in the most ham fisted way and I hope that this is the last time that they do this to asylum seekers who have to listen and watch the news to see whether they will be brought to a place or not.@DeptJusticeIRL you suck

The first group of asylum seekers were due to arrive the following day but following the meeting, their arrival was pushed back to Wednesday of this week.

On Tuesday, it emerged their arrival had been pushed back to this Friday. This has now been postponed once more.

The department met local Fianna Fáil Cllr Paul McNamara and community representatives in Achill on Wednesday night to hear their concerns. Protests took place outside the hotel where that meeting took place.

Cllr McNamara stated he was initially informed by department officials that 38 men would be housed at the facility but that this was changed following representations in the face of local pressure. He stated this week that 13 women were due to arrive on Friday with more asylum seekers, including families, arriving next week.

Silent protests took place at the hotel on Thursday, Friday and Saturday of last week and resumed on Tuesday of this week.

A Facebook page supportive of the protests titled ‘Achill Says No To Inhumane Treatment of Asylum Seekers’ has over 950 members, though not all are from the locality.

Many of those opposed to the plans have said neither the hotel nor the area is suitable to house asylum seekers.

A separate welcome group, led by the Green Party’s Saoirse McHugh, who is from nearby Dooagh, have pledged to help asylum seekers integrate into the community. The group say they are also opposed to direct provision but want to make the asylum seekers feel welcome on Achill Island.

Meanwhile a protest outside a proposed centre for asylum seekers in Ballinamore, Co Leitrim is continuing. And earlier this month Sean Lyons, owner of Fazyard Limited, announced he was withdrawing his tender to open a direct provision centre at the former Connemara Gateway hotel on the outskirts of Oughterard in Co Galway. The centre was widely opposed by the local community, many of whom took part in round the clock protests over a two week period at the site.