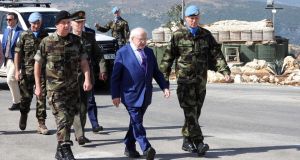 President Michael D Higgins has been sounding out global leaders about his plan to establish a fund to ease the worldwide migrant crisis, he has revealed.

During recent discussions at UN headquarters in New York and elsewhere, he sounded out leaders on his proposal to establish a global fund to identify migrants and their potential for assimilation in countries where they seek asylum and new lives, he told The Irish Times.

“If you have such a fund, you can talk about upscale people [educated and professional people], conduct a skills audit to assess the capacities of people in camps,” he said, ahead of his departure from Lebanon after his official visit there.

He added that researchers have found that within two years of leaving home 80 per cent of migrants want to go back to their countries of origin although there will be some who want to go elsewhere.

The global fund he is proposing would provide for training in languages and knowledge about both migrants and the countries of settlement. He spoke of tackling cultural issues such as granting women equal treatment and control over their bodies. “You can teach that,” he said.

In relation to migrant-receiving countries, there are other things to fund, he said. For instance, promotion of the “concept of hospitality [/is] common to all religions and cultures of the world”.

He argued that, in addition to a global fund, a set of regional instruments would have to be tailored for specific circumstances and peoples. “The money is available.”

On the issue of migration generally, Mr Higgins challenged the “false assumption that people are sedentary. People have been moving since the beginning of time.”

During his second term as president he said he has devoted considerable thought to changing perceptions and examining the causes of migrations. “We could take out a map and actually anticipate areas of migrant flows.” In addition to climate change and desertification, people flee division, conflict and genocide. In such cases, “where they go is over the border”.

He asked, “What do people in our position do?”

While part of the Oireachtas, he is “directly elected”. Since he is not involved in making legislation, he can be an independent voice for trying to effect change, he said.

While social media can be xenophobic and hate-filled, it can also carry positive messages, he pointed out. There is “anti-migrant feeling in parts of Europe that have never seen a migrant,” he said. Between 10 and 12 per cent of global gross domestic product is provided by migrant labour. “Not a single member state of the European Union would be able to function without migrant labour.”

The President attributed rising hostility towards migrants to a number of factors, including the lack of dialogue and discussion of this issue since the 1960s and hostility to “socialism” since the fall of the Soviet Union in 1989. As a result, people who are hostile to migrants or migration now “demonstrate in the streets”.

Other causes are the promotion of the free market as the sole option and the reduction of state regulation over business and banks. This has led to marginalisation of people who cannot compete in the free market place. “The state needs to regain control” and provide for the “basic needs” of the people, he said.