Older people seen out in shops, believing they are exception to stay at home message 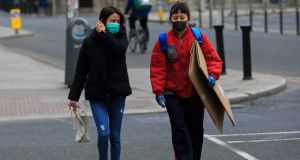 Doctors and pharmacists have raised concerns about a lack of cocooning among some over-70s who do not not understand or are not adhering to the stay at home message.

Dr Mary Favier, president of the Irish College of General Practitioners, said over-70s were generally very good at cocooning since the introduction of measures on Saturday to stop the spread of coronavirus. However, “some don’t understand the concept”.

“It needs a lot of further messaging and advice both nationally and within families,” she said.

In Kanturk, Co Cork, community pharmacist Sarah Magner said she still had many patients coming in who should be at home. “All seem to have a good reason as to why they should be the exception... If everyone thinks like this as themselves as the exception I fear for a generation.” She said older people should “not be too proud to ask for help”.

Dr Tomás Breslin, emergency medicine consultant at the Mater Hospital, said he was concerned about the “lack of clarity and apparent lack of understanding around cocooning”. When he recently saw older people out in shops, he thought: “These apparently now well older people could turn up in an emergency department extremely unwell in two to three weeks, when they may have irreversible respiratory failure which could easily be avoided if they had got someone else to do their messages for them.”

Jack Shanahan, a community pharmacist in Castleisland, Co Kerry, was “extremely worried” that some over-70s are not hearing the message after his pharmacy saw a “procession” of vulnerable over-70s on Monday. “In most cases they simply hadn’t made the connection . . . Some were worried they would be left behind,” he said.

The Irish Pharmacy Union (IPU) has called on the Government to temporarily suspend the prescription charge as volunteers are finding it difficulty to maintain social distancing while collecting it when delivering.

Alone, a charity which supports older people, received more than 1,100 calls to its Covid-19 helpline on Saturday, and is adding further staff to meet the increasing demand.

It welcomed the introduction of practical supports for older people by local authorities but urged communities, family members and neighbours to also step up.

Meanwhile, concern about the impact of a lack of exercise on the mental and physical health of cocooning over-70s was highlighted by advocacy group Age Action. Chief executive Paddy Connolly said the new regulations were presenting difficulties for many older people “who jealously guard their independence and don’t see themselves as vulnerable”.

An exercise routine for such people was “hugely important”, he said. Mr Connolly said he would like to see exercise programmes on television for older people as just 3 per cent of over-70s are online.

Meanwhile, the Irish Men’s Sheds Association (IMSA) has warned that cocooning must not socially isolate Ireland’s older population. “We ask the public to pick up the phone and call someone at risk in social isolation,” chief executive Barry Sheridan said.