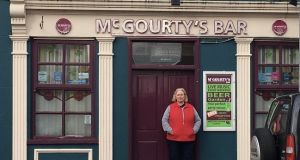 Lorna McGourty, who runs McGourty’s Bar in Castlerea, said one of her staff has been checking in with some of their older patrons by phone while the pub has been forced to close during the coronavirus crisis.

The local pub in Castleplunkett, Co Roscommon has been a lifeline for Tony Brophy since his wife died six months ago.

The 63-year-old usually calls into Dec’s Bar in the village three or four nights a week, often just for a cup of tea or coffee.

Though supportive of closing pubs as a virus containment measure, announced on March 15th, Brophy has been cut off from the familiar faces he meets in Dec’s. He is home alone and self-isolating to avoid contracting Covid-19.

“I was bad enough up to this. I lost my wife six months ago and I’m living on my own. It’s a terrible situation now that I can’t meet people,” said Brophy.

“There’s an awful lot of people in that situation and it’s going to have an awful effect on them psychologically.”

Padraig Morris, who lives outside Castlerea, Co Roscommon, is also feeling the impact. The 45-year-old farmer usually visits one of Ballinlough’s pubs two or three nights a week, often to play card games. The venues offer a feeling of community, he says, that will be sorely missed during this crisis.

“There would be a feeling of isolation. It’s going to be hard on a lot of people, especially older people. For them, it’s their social outlet - they have nowhere else to go,” he says.

While a very small minority of pubs have operated clandestinely despite the closure order, some that are following the rules have been keeping an eye out for their regulars.

Lorna McGourty, who runs McGourty’s in Castlerea, said one of her staff has been checking in with some of the pub’s older patrons by phone during the crisis as the customers are “like family”.

“Some of them would be single elderly men who will be sitting at home now, and they’re just not used to it,” said said.

“We will try to reassure them that we’re here if they need anything. We have an obligation to them and we do care.”

Damien Garvey, whose parents Tom and Bonnie run Garvey’s in Ballintubber, Co Roscommon, said many of their customers would be “well into retirement”.

“It’s going to be hard on them for the next couple of weeks, but all we can do is keep an eye on them,” he said. “I’m a plumber down here as well so I’ll be around the town and the village a bit with calls and that and will keep an eye out for them. That’s all you can do.”

Roscommon councillor Nigel Dineen said rural communities are pulling together to make sure people missing their visit to the pub are not left entirely without community engagement.

“People have set up WhatsApp groups and different groups to make sure that nobody is not being spoken to, rang, texted,” he said.

“Isolation is a tough thing if you’re on your own...especially if you’re used to going out to a pub to meet people. When that’s taken away from you, it needs to be substituted with a call or a text.”

While customers are losing out on interaction, the publicans themselves have seen their trade completely halted. Industry lobby groups have long pointed out that some 1,500 pubs have closed in the State since 2006, with around 7,000 bars in operation in 2018.

Some publicans fear the current closures could see the number drop further, in rural areas particularly, with many possibly not reopening if the measures remain in place for a prolonged period.

“It might actually change the whole culture in Ireland of people socialising,” said McGourty. “It’s hard to see how the small rural publican might survive.”