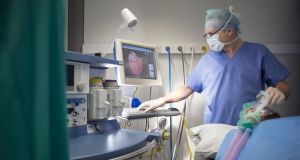 Medtronic is sharing the design specifications for one of its ventilators which can be used to treat critically ill patients suffering the worst affects of Covid-19. Photograph: iStock

Dublin-headquartered ventilator maker Medtronic is sharing the design specifications for one of its ventilators which can be used to treat critically ill patients suffering the worst affects of Covid-19.

Medtronic, one of the world’s biggest makers of life-saving ventilators, said it would share details for its Puritan Bennett 560 (PB 560) machine in line with guidance from the US Food and Drug Administration (FDA). Software code and other information would also soon be available, the company said.

Ventilators are considered critical in the fight against the Covid-19 disease as they permit an infected person’s lungs to rest while the machine supplies oxygen and simulates breathing.

Introduced to the market in 2010, the PB 560 is sold in 35 countries around the world. It can be used in a range of care settings while its design makes it a good solution for institutions looking to quickly ramp up ventilator design and production, Medtronic said.

The PB 560 is a compact, lightweight and portable ventilator, Medtronic said, adding that it could be used both in clinical settings and at home.

“Over the past few weeks, we have ramped up production of our Puritan Bennett 980 ventilators. But we also know we can do more, and we are,” said Bob White, executive vice-president at Medtronic. “By openly sharing the PB 560 design information, we hope to increase global production of ventilator solutions for the fight against Covid-19.”

Meanwhile, Mercedes-Benz’s F1 team, which is based in Brackley in the UK, has confirmed that it is going to build a breathing device to help those suffering from Covid-19 infections. The equipment, known as a continuous positive airway pressure (CPAP) device, has been designed in collaboration with University College London. It’s not a ventilator, but can deliver oxygen to the lungs without the need for a ventilator.

The device has been developed as part of Project Pitlane, a coming together of F1 teams – Mercedes, Williams, Haas, Racing Point, Renault, Red Bull and McLaren – to turn their factories over to medical device production for the duration of the current crisis.

“Project Pitlane will pool the resources and capabilities of its member teams to greatest effect, focusing on the core skills of the F1 industry: rapid design, prototype manufacture, test and skilled assembly. F1’s unique ability to rapidly respond to engineering and technological challenges allows the group to add value to the wider engineering industry’s response,” the teams said in a joint statement.

1 Direct sea routes to Europe offer certainty in choppy Brexit waters
2 Anti-alcohol zeal of public health experts peppers reopening debate
3 ‘I don’t need to do any of this. . .I don’t actually need to work.’
4 Move to EU or face disruption, City of London is warned
5 There was no vaccine for Anglo: Why the last crisis was different
6 Pavlok: zapping bad habits with 450 volts
7 How to . . . upgrade your console’s storage
8 An Post parcel volumes to hit weekly record of 3.3m
9 Slow crisis stalks Japan’s overstuffed banking industry
10 Promontoria barred from pursuing doctor over Ulster Bank loan
Real news has value SUBSCRIBE