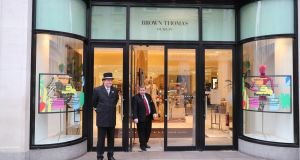 An increasing number of retailers have suspended their online stores, while others are warning of delays and limited options.

Brown Thomas and Arnotts have stopped sales through their websites “until a time when it is safe to start again”.

They were followed by Argos, which has taken its Irish website offline, as it and a number of other well-known retailers temporarily suspend their online operations.

Grafton Group closed its Woodie’s DIY business in the Republic on Monday due to the tightened restrictions, with its home delivery service also suspended. Rival B&Q is currently only operating a “click and collect” service.

As of Monday, well-known high street names such as Debenhams, Marks and Spencer, Dunnes Stores, H&M and Topshop were continuing to offer services through their websites. However, River Island has suspended its online store.

Pharmacies are allowed to stay open under the new restrictions but Boots Ireland’s website was offering a “virtual queue” early on Monday, with customers expected to wait up to 10 minutes before they can shop for goods. It also warned that deliveries can currently take up to seven days. Rival McCabes Pharmacy also advised of delays due to higher-than-normal orders and Covid-19 restrictions.

Many book shops have stopped fulfilling orders, including Eason, which said it had temporarily suspended shipping. Dubray, Kenny’s and Books Upstairs are among other booksellers who have stopped taking orders since further restrictions were announced on Friday.

Music, DVD and games seller Golden Discs currently has a “skeleton fulfilment list”, having delisted some items. However, it is endeavouring to continue to offer online deliveries.

“We realise the products we sell are essential to people’s mental health at this time,” it said.

Supermarkets are continuing to offer home deliveries but many customers have experienced difficulties securing delivery slots, with some saying they can’t make bookings at all.

Brown Thomas and Arnotts notified customers that their online shops had been suspended in response to the latest Government measures to combat the spread of Covid-19.

“We are happy as we know it is the right thing to do and that we will be back sending out the things you love when it is safe to do so,” Arnotts said in an e-mail to customers.

“If you have already placed an order with us, we will be in touch to let you know what’s happening in the next day or two,” the email said.

“Don’t worry, we are not going anywhere,” Brown Thomas added in a notice on its website.

Brown Thomas and Arnotts, both controlled by the Hilary and Galen Weston-owned Selfridges Group, originally shut their doors on March 18th out of concern for the health and safety of their employees and customers. Brownthomas. com and Arnotts.ie continued to operate until the weekend after the Government imposed further restrictions.

British clothing retailer Next became one of the first companies to shut their online operations after it came under pressure from concerned staff at its warehouses and distribution operations last week. A note on its website said it would no longer be taking online orders until further notice.

At Argos, the website is currently unavailable to Irish users with a spokeswoman for the company saying that in addition to closing its stores recently, it has now suspended its website “for a short period”.

“We expect to have it [the website] up and running again in a few days,” the spokeswoman told The Irish Times.

The retailer’s British website is still live, albeit with some service disruptions.

1 Penneys will not reopen on Monday despite expected changes to lockdown rules
2 Angela Merkel sweeps in to save the euro zone
3 Irish company MyBio to sell 10-minute Covid-19 antibody test
4 In six months we will be in the grip of a 1980s-style recession
5 Don’t expect a bonanza for Ireland from the EU’s €750bn recovery cash
6 State’s tourism taskforce wants changes to school holidays to boost ‘staycations’
7 Perrigo tells court of ‘very high level of unfairness’ in €1.64bn tax bill
8 Biopharma company founder named EY World Entrepreneur of the Year
9 Pandemic payment may be tapered based on previous earnings
10 Should my mam wait for house prices to drop before buying?
Real news has value SUBSCRIBE